Berkeley — Steadily and alarmingly, humans have been depleting Earth's soil resources faster than the nutrients can be replenished. If this trajectory does not change, soil erosion, combined with the effects of climate change, will present a huge risk to global food security over the next century, warns a review paper authored by some of the top soil scientists in the country. 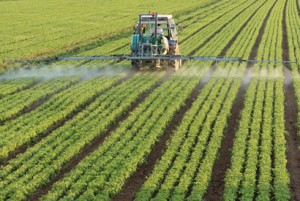 Scientists warn that humans have been depleting soil nutrients at rates that are orders of magnitude greater than our current ability to replenish it. They say that fixing this imbalance is critical to global food security over the next century.

The paper singles out farming, which accelerates erosion and nutrient removal, as the primary game changer in soil health. "Ever since humans developed agriculture, we've been transforming the planet and throwing the soil's nutrient cycle out of balance," said the paper's lead author, Ronald Amundson, a professor of environmental science, policy and management at the University of California, Berkeley. "Because the changes happen slowly, often taking two to three generations to be noticed, people are not cognizant of the geological transformation taking place." In the paper, to be published Thursday, May 7, in the journal Science, the authors say that soil erosion has accelerated since the industrial revolution, and we're now entering a period when the ability of soil, "the living epidermis of the planet," to support the growth of our food supply is plateauing. The publication comes nearly two weeks ahead of the Global Soil Security Symposium at Texas A&M University, a meeting held as part of the declaration of 2015 as the International Year of Soils by the United Nations.

The authors identify the supply of fertilizer as one of the key threats to future soil security. Farmers use three essential nutrients to fertilize their crops: nitrogen, potassium and phosphorous. The paper credits the discovery of synthetic nitrogen production in the early 1900s to significantly increased crop yields that supported dramatic global population growth. Because the process of synthesizing nitrogen is energy- intensive, its supply is dependent on fossil fuels. Unlike nitrogen, potassium and phosphorous come from rocks and minerals, and the authors point out that those resources are not equitably distributed throughout the world. The United States has only 1 to 2 percent of the world's potassium reserves, and its reserves of phosphorous are expected to  run out in about three decades. "This could create political challenges and uncertainties," said Amundson. "Morocco will soon be the largest source of phosphorous in the world, followed by China. These two countries will have a great deal of say in the distribution of those resources. Some people suggest we will see the emergence of a phosphorous cartel."

Another threat to soil security relates to its role as a mass reservoir for carbon. Left unperturbed, soil can hold onto its stores of carbon for hundreds to thousands of years. The most recent estimates suggest that up to 2,300 gigatons of carbon are stored in the top three meters of the Earth's soil – more carbon than in all the world’s plants and atmosphere combined. One gigaton is equal to a billion tons. But agriculture’s physical disruption of soil releases stored carbon into the atmosphere. Based on the area of land used for farming worldwide, 50 to 70 gigatons of carbon has been released into the atmosphere throughout human history, according to the paper. Proponents of sequestration, the long-term storage of carbon in soil, have argued that regaining this carbon will be a means to mitigate continuing fossil fuel emissions of the greenhouse gas. "Carbon sequestration plans won't make a dent in the amount of soil released by climate change," countered Amundson. "The amount of carbon stored through sequestration would be tiny compared to the potential amount lost through global warming." Of particular concern are the large carbon stores in the soils in the planet’s polar regions. Researchers have found that temperatures are increasing at greater rates in the northern latitudes. "Warming those areas is like filling your freezer with food, then pulling the plug and going on vacation," said Amundson. "There will be a massive feast of bacteria feeding on the food as the plug gets pulled on the stored carbon in the frozen soil. Microbes are already starting the process of converting the carbon to CO2 and methane."

The authors recognize the human reliance on farming and note that most of the Earth's most productive soils are already in agricultural production. However, they argue for  better management of the soils we rely upon. One proposal is to stop discarding nutrients captured in waste treatment facilities. Currently, phosphorous and potassium are concentrated into solid waste rather than cycled back into the soil. Additionally, more efficient management is needed to curtail losses from soil. Excess nitrogen, for example, is considered a pollutant, with the runoff sapping oxygen from the nation's waterways, suffocating aquatic life and creating dead zones in coastal margins. Amundson noted that it did not take too long to get people to start separating paper, glass and aluminum cans from their trash for recycling. "We should be able to do this with soil," said Amundson. "The nutrients lost can be captured, recycled and put back into the ground. We have the skillset to recycle a lot of nutrients, but the ultimate deciders are the people who create policy. It's not a scientific problem. It's a societal problem." Other authors on the paper are Asmeret Asefaw Berhe, an associate professor of soil biogeochemistry at UC Merced; Jan Hopmans, a professor of hydrology at UC Davis; Carolyn Olson, a senior scientist at the U.S. Department of Agriculture Climate Change Program; A. Ester Sztein, assistant director at the National Academy of Sciences Board on International Scientific Organizations; and Donald Sparks, a professor of plant and soil science at the University of Delaware.