California agriculture reaps $937 million to $2.4 billion per year in economic value from wild, free-living bee species that serve the critical function of pollinating crops, according to a new study by scientists at the University of California, Berkeley, published this week in the June issue of the journal Rangelands. 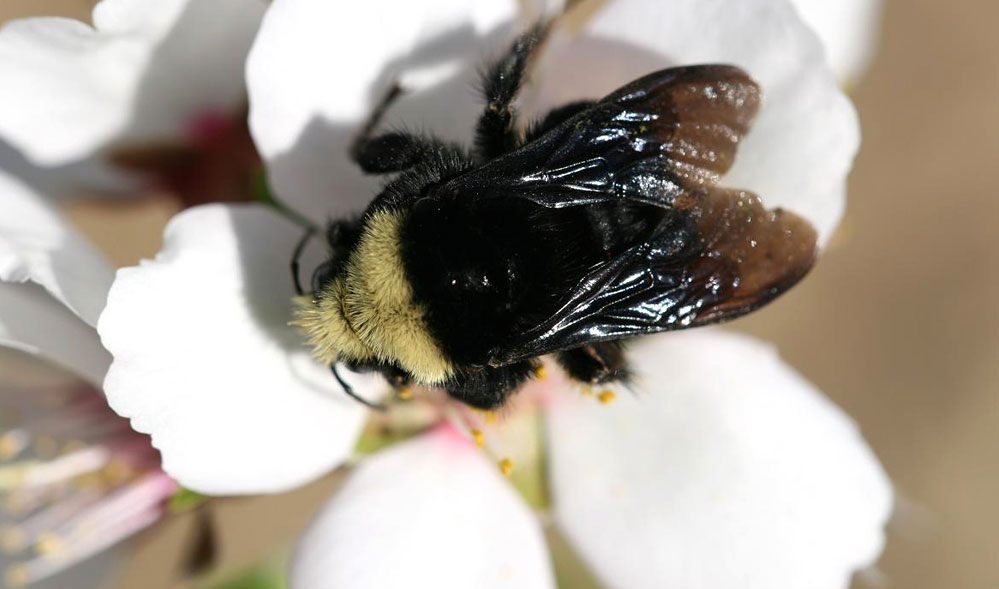 About one-third of the value of California agriculture comes from pollinator-dependent crops, representing a net value of $11.7 billion per year, according to the study. Currently, many farmers rent European honeybees to ensure crop pollination, and it has been widely assumed that wild pollinators were not a significant source of crop pollination. However, the new study estimated that wild pollinators residing in California’s natural habitats, chiefly rangelands, provide 35-39 percent, or more than one-third, of all pollination “services” to the state’s crops.

“This means that preserving rangelands has significant economic value, not only to the ranchers who graze their cattle there, but also to farmers who need the pollinators,” said Claire Kremen, UC Berkeley associate professor of environmental science, policy and management, and senior author of the study.

The study is the first to calculate the percentage of crop pollinators that are wild, free-living species based on their proximity to natural habitats, and thus to identify the economic value of the pollination service due to wild pollinators.

Researchers said both rented European honeybees and wild pollinator bee species are currently experiencing supply problems. More than 1 million honeybee colonies are imported to California each year, chiefly for almond pollination. Recently, beekeepers have suffered high rates of colony losses due to diseases, pesticides and management factors, increasing the uncertainty of both supply and rental prices.

Wild pollinator species also show declines in abundance and diversity on farmlands, most likely due to habitat loss from the intensive monoculture, or single crop, production system that typifies much of California’s agricultural lands.

“Currently, wild pollinators are least abundant in intensive monoculture production areas such as sunflowers, almonds and melons, where demand for pollination services is largest,” said Kremen, who was named a 2007 MacArthur Fellow for her work in ecology, biodiversity and agriculture.

Kremen said the findings suggest that if farmers paid ranchers to stay on the land and maintain the habitat, the farmers would be increasing their sources of pollination and developing critical diversification to support their agricultural practices.

“We would never invest all of our retirement savings in just one stock, but this is essentially what farmers do when they rely solely on the European honeybee for pollination,” said Kremen. She said this is exactly what is occurring in California agriculture right now.

“Diversifying their monetary investment in pollinators to include wild, rangeland-dwelling species is the same idea as diversifying a stock portfolio,” she said, adding that the unpredictability associated with climate change amplifies the importance of diversification.

“Some insect species will thrive in changed climate conditions, and other won’t. Maintaining a biodiverse stock of pollinators is like the insurance that a diversified stock portfolio brings: some will be up, some will be down, but having a portfolio of many different species ensures viability into the future,” Kremen said.

Placing a value on ecosystem services is an established part of conservation science and helps scientists understand the contributions of various elements of an ecosystem and how they influence each other.

The UC Berkeley researchers estimated the current contribution of wild pollinators to California agriculture by integrating their knowledge of the relationship between natural habitat and wild pollination services with the added dimension of location-specific data.

“Essentially, we identified where wild pollinators were living in relation to crops. When we put it all on a map, we got a highly informative picture of how the pollinators could be impacting crop production,” Kremen said. She said they used data from the National Agriculture Statistics Service on crop production and value to help calculate the monetary value.

Changing perspective on role of rangeland

Lynn Huntsinger, a professor of rangeland management at UC Berkeley who is not affiliated with the study, said that the findings are significant because the study is the first to discover that conserving rangelands enhances crop production.

“This evidence of economic symbiosis makes it clear that rangeland conservation cannot be separated from the needs of agriculture, whether it is farming or ranching,” Huntsinger said.

She said that precisely because rangelands have been used for ranching – livestock grazing – ranchers have kept the land conserved and stewarded it in ways that result in habitat that sustains wild bee species as well as other wildlife.

“Studies in some ecosystems have shown that well-managed grazing can keep invasive grasses from shading out the flowering herbs that native pollinators rely on,” Huntsinger said.

The state’s rangelands have been decreasing steadily, as the foothills and oak-dotted grasslands can be highly desirable for residential development, Huntsinger said. California lost 105,000 acres of grazing lands to urbanization between 1990 and 2004, according to the state Department of Conservation. The California Oak Foundation projects that the state could lose another 750,000 acres by 2040.

She said the vast majority of rangelands are privately owned, and income from ranching is usually small compared to the price the land can command in the real estate market, so when cash is needed for college, retirement or other major expenses, ranchers face strong pressure to sell.

“This new finding about pollinators is important because not only does it tell us something we need to know to maintain our ability to grow food, it also provides a statewide value for the service of providing pollinator habitat. Ranchers need to get that value and other rangeland values recognized in order to sustain their ranches,” Huntsinger said.

The finding comes at a time when there is growing interest within the ranching community in providing ecosystem services, Huntsinger said. For example, as part of conservation efforts, California ranchers have been asked to maintain flowers for endangered butterflies and to keep small spring wetlands known as vernal pools healthy – using grazing as a tool to manipulate the grassland.

Darrel Sweet, a fifth generation cattle rancher from Livermore and a former president of the California Cattlemen’s Association, said that placing a dollar value on rangelands pollination services lends powerful support to these efforts.

“The value of grazing and other land stewardship practices of California’s ranchers is being increasingly acknowledged as not only a preferred land use, but also as an essential resource management tool,” said Sweet. “I hope this study is just the beginning of comparable findings that show how ranching is a critical – and multifaceted – element of California agriculture.”

Calling to mind the classic “Oklahoma!” song “The Farmer and Cowman Should Be Friends,” the study’s findings suggest a host of ways farmers might work with ranchers to their mutual benefit, Kremen said.

While the study issues the caveat that the exact value of pollination services from natural habitats is difficult to pin down using currently available data, Kremen said the findings highlight from a biophysical perspective how important this value is.