By Joanna Hsu, graduate student in the Suding Lab. 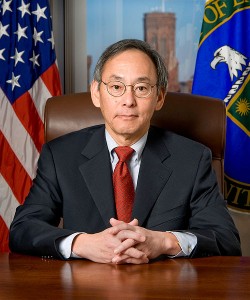 VIP for an hour

As a graduate student in the sciences, my typical work day might include analyzing data, reading a published paper, or churning out homework for a class. An exciting day might include submitting a manuscript to a journal or finally getting a graph to look exactly the way I want it to. So getting an opportunity to meet with Secretary of Energy Steven Chu with fellow graduate students from my renewable energy class was definitely an extraordinary moment in my graduate career.

Like my classmates, I wore a suit for the occasion. For me, it was the first time since college admission interviews ten years ago that I felt compelled to don a full suit. Credibility in my field of study, ecology, was in no way linked to looking respectable. In the lobby of the building before our meeting, I swapped out my Tevas for black heels.

Department of Energy (DOE) staff escorted our group of about 15 up the elevators and then into a small but posh conference room. Secretary Chu took his seat at the head of the table, a department seal on the wall behind him, an American flag to his left, a DOE flag to his right. Sitting behind the Secretary was Arun Majumdar, director of ARPA-E, the new federal agency for advanced energy research.

A pair of monitors displayed the cover slide of our presentation. I tucked my purse below the black leather conference chair and nervously folded my hands over my one page sheet of notes. I am no stranger to giving presentations, but my audience is not usually U.S. Cabinet members. A staff member placed a platter with kid-sized plastic bottles of water in the middle of the conference table. None of us reached for a bottle. A glass goblet with water was placed on a napkin in front of Secretary Chu.

The Secretary opened the meeting on a light note, quipping that he was only wearing a suit for our sakes − otherwise he was more comfortable in Berkeley attire: sandals. This wasn't surprising because Secretary Chu  had once been in the same position as me −  a graduate student at Berkeley. He earned his PhD in physics and served as director of the Lawrence Berkeley National Laboratory before President Obama appointed him to the Secretary of Energy position.

Governor Jennifer Granholm introduced our group and the project we had been assigned: to develop a regionally-based plan for renewable energy and jobs for the nation. Granholm was the former Governor of Michigan, co-professor of the renewable energy class, and our fearless leader. Without the efforts of her and co-professor Steven Weissman, we would not be in Washington, D.C. having this meeting.

Secretary Chu glanced at the stack of reports we placed in front of him: individual policy proposals for almost every state as well as detailed descriptions of the regional strategies we envisioned. The stack was several inches high. One of my classmates directed him to the small booklet on top of the massive pile, telling him that the booklet was the summary of the longer report, in case he didn't have time for the full report. "You'd be surprised at how much I read," Secretary Chu responded. "But can I get an electronic copy of these?"

After Governor Granholm's introduction, we jumped into our presentation. Six of us spoke, presenting the highlights from semester-long group discussions on how states could work together to bring more renewable energy and jobs to their regions. Our strategies were tailor-made for each region - for example, a focus on launching wind energy in the Great Plains but a focus on electricity infrastructure development and attracting clean technology companies in the South. Our ideas for regional cooperation included aggressive portfolio standards, competitions to launch renewable energy, clean energy banks, and centralized planning and investment. Federal level policy in the energy arena is politically challenging, but we made the case that states and regions could still charge forward.

Secretary Chu nodded as we spoke, making eye contact with the presenters as we spoke from the conference table. He looked professorial, with a round face and round glasses. When we were finished, Secretary Chu thanked us for our work and immediately jumped into offering feedback. He liked the idea of a clean energy bank, emphasizing that it would broaden the market for investors in renewable energy. The U.S. has a finance institution (OPIC) that sponsors foreign development projects, including clean and renewable energy projects. Why not a domestic clean energy bank? This didn't pass the national muster, but perhaps the Northeast, with small states that might stand to seriously benefit from a clean energy bank, could do it.

Secretary Chu was well-spoken and assertive. Cool, composed, a scientist with a bit of a glossy finish. In my mind, this was to be expected. This Chinese-American, the first Nobel laureate to be appointed to the Cabinet, has spent considerable time on the public hot seat for everything from gas prices to the Solyndra bankruptcy and home weatherization programs. He'd be toast if he couldn't calmly defend his every position.

In the time remaining, Secretary Chu engaged us on a few other issues brought up during our presentation. He exuded competence in not only the policy aspects of energy, but on the technical, legal, financial, and economic details of keeping our homes lit and our car engines running.

We knew our meeting was over when a DOE employee slipped into the conference room and slid a note in front of Secretary Chu. Before leaving, Secretary Chu shook hands with each of us and we took a few group photos in front of the flags. “You should always take off your name tags for pictures,” Governor Granholm told us students, referring to the personalized VIP badges we had been given when we entered the building.

One of my classmates responded, “The difference between you guys and us is that no one will recognize us without our name tags.” We all laughed, but I'm not sure his statement will still be true in a few years.  I was pretty impressed with my classmates. Many of them were spending the summer working at high-impact places, including the Federal Energy Regulatory Commission, the Bipartisan Policy Center, OPIC, Point Carbon, and renewable energy development companies. I won't be surprised if some of my classmates end up as public figures.

But for now, we kept our name tags on for the pictures. I am not in need of being a household name or having my own security detail just yet – I am simply delighted that several scientists asked for reprints of my first published journal article. Unlike me, Secretary Chu is prohibited from riding his bike to work. I wonder how he made the transition.

When the pictures were done, we filed out of the conference room and took the elevator back down. In the lobby, I returned my VIP badge to the security desk and put my Tevas back on.  Back to being a regular grad student. For now.

This post was originally published on the Berkeley Energy & Resources Collaborative blog.