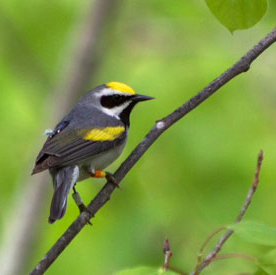 This male golden-winged warbler is carrying a geolocator on its back (appears black with white light sensor) and identification bands on its legs. (Photo by Gunnar Kramer)

BERKELEY — When birds unexpectedly flee their nesting grounds, it may be a demonstration of Mother Nature’s early-warning system that a massive storm is approaching.

While tracking a population of golden-winged warblers, a research team led by UC Berkeley ecologist Henry Streby discovered that birds in the mountains of eastern Tennessee fled their breeding grounds one to two days ahead of the arrival of powerful supercell storms. The storm system swept through the central and southern United States in late April 2014, generating 84 confirmed tornadoes and killing 35 people.

“It is the first time we’ve documented this type of storm avoidance behavior in birds during breeding season,” said Streby, who conducted the work while he was a National Science Foundation postdoctoral fellow and a visiting research scholar in UC Berkeley’s Department of Environmental Science, Policy and Management. Other members of the team were biologists at the University of Minnesota, the University of Tennessee and the U.S. Geological Survey.

“We know that birds can alter their route to avoid things during regular migration, but it hadn’t been shown until our study that they would leave once the migration is over and they’d established their breeding territory to escape severe weather,” said Streby. “The warblers in our study flew at least 1,500 kilometers (932 miles) total to avoid a severe weather system. They then came right back home after the storm passed.”

Notably, the birds fled while the storm was still 250-560 miles away, and local environmental cues to inclement weather – including changes in atmospheric pressure, temperature and wind speed – were largely absent.

“At the same time that meteorologists on the Weather Channel were telling us this storm was headed in our direction, the birds were apparently already packing their bags and evacuating the area,” said Streby. The researchers described this “evacuation migration” of the warblers in a paper published Thursday, Dec. 18 in the journal Current Biology.

Read the full story at the source