The paper, published in the July 15 issue of the journal Science by an international team of 24 researchers, presented evidence highlighting the reverberating – and often unexpected – effects the loss of “apex consumers” have had not only on immediate prey species, but also on the dynamics of fire, disease, vegetation growth, and soil and water quality.

“This is the first paper to bring together studies that present strong empirical evidence of what naturalists and ecologists have long suspected,” said Justin Brashares, UC Berkeley associate professor in the Department of Environmental Science, Policy and Management. Brashares and Mary Power, UC Berkeley professor of integrative biology, worked closely on the study with lead author James Estes, adjunct professor of ecology and evolutionary biology at UC Santa Cruz.

Brashares’s research on African wildlife linked the reduction of lions and leopards in sub-Saharan Africa to the subsequent increase of baboon populations. In turn, that led to the increased transmission of intestinal parasites from baboons to humans as the baboons were pushed closer to human settlements in search of food.

His work in East Africa with A.R.E. Sinclair of the University of British Columbia also revealed impacts from rinderpest, an infectious viral disease introduced by human activity in the late 1800s. The disease decimated populations of wildebeest, buffalo and other ungulates until it was eliminated in the 1960s by a vaccination program. During the time that these populations of grazing animals were low, plant biomass accumulated, fueling large wildfires in the region. After the elimination of rinderpest, the native ungulate populations bounced back, shrublands were reduced to grasslands, and the frequency and intensity of wildfires decreased.

Power demonstrated similar interdependencies in freshwater ecosystems through experiments conducted over the past 20 years in California’s Eel River. Power and her graduate students manipulated everything from the presence of apex predators – including large minnows and steelhead trout – to the position of the rocks and the amount of algae and sunlight in the river.

The experiments shed light on the top consumers’ impact on smaller fish and predatory insect larvae, and in turn the effect on their insect prey and the algae at the very bottom of the food chain. 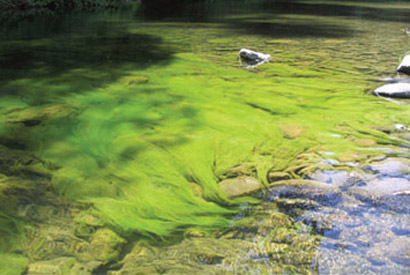 Without the top predators, she found, the small fish fry and predatory insects ravaged the grazers, allowing algae to grow into lush green mats. These algae mats became productive breeding grounds for midges, as well as homes for diatoms that fix atmospheric nitrogen, providing a nutrient that is typically in short supply in unpolluted western rivers.

One implication is that eliminating top fish predators may lead to infestations of midges or mosquitoes that often carry disease.

“This work provides an understanding of the food web that allows us to start predicting how climate change, landscape change, fire or biotic change will affect ecological interactions, many of which have consequences for the public and are of interest to society,” she said.

The authors of the paper pointed out that Earth is in the midst of a sixth mass extinction, but that unlike previous extinctions, human activity is the primary culprit in the current decline of large numbers of species on this planet.

“In recognizing that the loss of a species at the top of a food chain is irreversible and has great and pervasive impacts on ecosystems, we also must realize that the costs of maintaining top predators and mega-herbivores is only a tiny fraction of the price we pay in losing them,” said Brashares.

Major funding for this research came from the Institute for Ocean Conservation Science at Stony Brook University, with support from The Pew Charitable Trusts.

For more information about the study:

Read the full story the source.