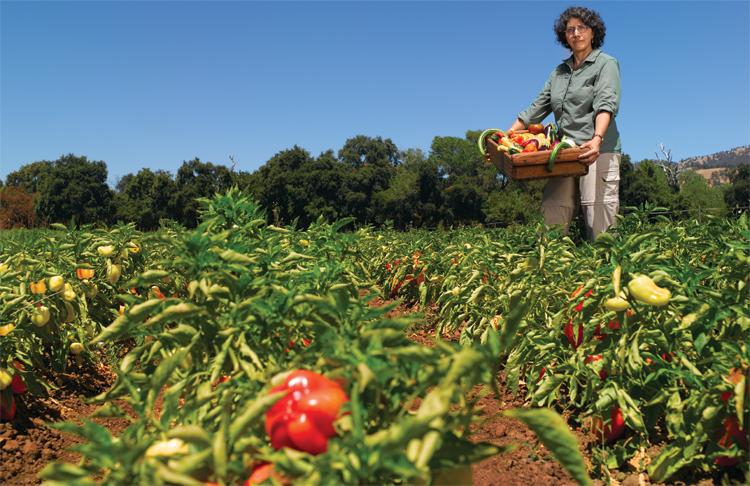 When American families sit down to dinner, often the concern is to avoid eating too much. Yet in 2010, the United Nations' Food and Agriculture Organization (FAO) estimated that more than 900 million people around the world were undernourished. By 2050, the world's population is projected to rise to somewhere around 9 billion — and more people will likely be eating more meat, which takes more resources and energy to produce than most crops.

How on earth will our agricultural systems feed all those mouths, especially while coping with climate change, soil degradation and erosion, water shortages, and rising energy prices? And can it be done without increasing the environmental damage attributed to industrial farming practices?

Maybe, if we can learn to see landscapes through the eyes of a bee. That may seem a tall order for such a tiny insect, but Claire Kremen believes that understanding what is good for bees is a first step toward shaping agricultural ecosystems, or "agroecosystems," that can sustain both humans and natural biodiversity, without the need for the huge inputs of chemicals and energy that have made industrial farming practices so damaging.

Kremen, a conservation biologist and associate professor in the Department of Environmental Science, Policy, and Management (ESPM), was studying the effects of natural habitat on the crop pollination services of wild bees when she made an observation that would alter the focus of her research. The farms in her study that were more biodiverse, growing multiple crops with organic techniques, interspersed with natural habitat, seemed able to "grow their own bees," providing sufficient food and nesting resources to act as oases for wild pollinators in the midst of otherwise intensively farmed landscapes. These farms could rely to a large degree on wild bees to pollinate their crops, while farms growing only one crop had to import European honeybees for pollination.

This discovery put Kremen on the road to realizing that most or even all of the inputs that modern commercial farms require — chemical pesticides and fertilizers, wasteful amounts of water and energy, imported pollinators — were needed only because the monoculture-dominated landscapes created by industrial agriculture lacked biodiversity.

"From studying the pollinators, I realized that the way we conduct agriculture has basically required us to replace all of the ecosystem services that used to be in the agricultural ecosystem with substitutes," she says. If farmers could bring back many of the traditional practices that supported biodiversity, enhanced by the application of modern ecological science, Kremen believes that the world could produce more food while reducing agriculture's harmful effects, making it more sustainable over the long term.

A growing number of policy-makers and researchers are thinking along the same lines. A 2008 report released by the International Assessment of Agricultural Science and Technology for Development, a multinational effort spearheaded by the World Bank and the FAO, concluded that modern agriculture would have to shift rapidly away from industrialized systems and toward sustainable, small-scale, diversified farming systems in order to meet the challenges of population growth, hunger, environmental degradation, and climate change.

Kremen and a group of UC Berkeley colleagues from a variety of disciplines are leading the charge, establishing a new Berkeley Center for Diversified Farming Systems to bring together researchers, writers, and practitioners from many fields to focus on feeding the world's growing population through diversified, multifunctional agriculture that also addresses the poverty and lack of access to land that are the root causes of hunger. Thanks to support from the Neckowitz Family Foundation, the Berkeley Institute of the Environment has already hosted a series of roundtables and presentations on topics related to diversified farming systems, with more to come. up agroecological practices.

Berkeley is uniquely positioned to host this interdisciplinary research and education center, Kremen says, because of its world-renowned faculty in the fields of agroecology, science, technology, society, agricultural economics, and rural sociology. Notes Huntsinger: "That's the beauty of our college, that we can bring all these things together." 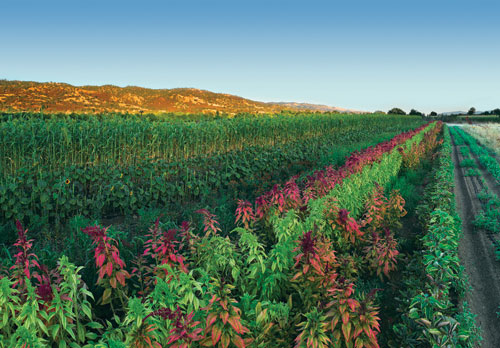 Generally speaking, a diversified farming system is one that promotes biodiversity across spatial scales, from plot to field to landscape. Crops are planted and livestock raised in combination, resulting in interactions that sponsor the functioning of the farming systems in ways that replenish natural ecosystems. Methods employed within a diversified farm may include minimal soil tillage, growing multiple crops together, planting cover crops, and interspersing trees and shrubs with crops and livestock.

These practices also provide pollination, pest and disease control, water purification, and erosion control. They help to build healthy, productive soil and reduce water use, as demonstrated by research conducted in both the Altieri and Kremen labs on farms in Napa, Sonoma, and Yolo counties (see On the Ground). "Diversified farming systems produce and regenerate the ecosystem services that the agricultural system needs," Kremen says. This allows farmers to forgo the harmful inputs and practices required in industrial farming, which is beneficial for the biodiversity that in turn produces the services. "I see it as a cycle." At the landscape scale, diversified farming practices include coordination among land managers to protect wildlands in and around agricultural areas, and the support of ecological practices on rangelands and in forests. "In California, 35 million acres of rangelands are providing all kinds of services, from habitat for pollinators to livestock products to viewsheds," says Huntsinger, a range ecologist and manager (see "Preserving Rangeland Biodiversity").

Some heritage systems, like the Ifugao rice terraces of the Philippines, maximize the use of mountainous terrain for rice production while incorporating stands of managed forest and a variety of aquatic and terrestrial wildlife. Other systems combine traditional farming techniques with modern ecological science and innovative marketing and distribution methods; Kremen points to Full Belly Farm in California's Capay Valley, which successfully raises more than 80 different crops, wresting a huge amount of produce from a small area. Even industrial farms can become more biodiverse through the application of improved techniques. Monocrops such as vineyards, for example, can be broken up with flowering cover crops, hedgerows, and corridors that help control pests without chemical inputs.

How to Feed 9 Billion?

For all their potential benefits, the question remains: Can diversified farming systems feed a growing, changing world? Perhaps a better question might be, can we feed the world without them? Despite the tremendous crop yields made possible by industrial farming and the technologies of the Green Revolution of the 1960s and '70s, 900 million people still do not get enough to eat, and starvation has become a recurrent feature of life in sub-Saharan Africa. Increasing the food supply is not enough; that food needs to get to those who can least afford it. "The Green Revolution didn't solve world hunger; it solved the number of calories," Kremen says.

Most of the food consumed in developing nations is produced by small farmers, many of them still using subsistence methods. Their farms are where the productivity gains must come from, and the question, Kremen says, is whether countries will adopt policies that favor industrial intensification, or sustainable intensification based on agroecological principles.

One of the key reasons that the Green Revolution bypassed the world's poorest farmers is that they couldn't afford its technologies. In his report to the UN, De Schutter pointed to evidence that agroecological methods outperform chemical fertilizers in boosting the amount of food produced by subsistence farmers. Many of these methods are inexpensive but require more labor — which could create more rural jobs and help to alleviate poverty.

"We won't solve hunger and stop climate change with industrial farming on large plantations," De Schutter said in a statement accompanying the report's release. "The solution lies in supporting small-scale farmers' knowledge and experimentation, and in raising incomes of smallholders so as to contribute to rural development."

Industrial agriculture isn't likely to disappear any time soon, and many experts believe that any solution to the twinned problems of hunger and resource depletion will require some combination of industrial and sustainable methods. Some, like agricultural economist Zilberman, argue that modern industrial technologies, particularly genetic engineering, could have a crucial role to play in helping agriculture to wean itself from the worst of its chemical abuses, through pest-resistant crop varieties, and to adapt to climate change by developing heat- and droughttolerant varieties.

"Diversified farming systems are crucial to the future of the University, California, and even to global food production, but the concept really has to be inclusive of modern biotechnologies," Zilberman says. "It has to take the best of science that's sustainable and combine it with environmentalism."

Kremen says that, while the economics perspective is a key one for this growing interdisciplinary group, she is skeptical about the ultimate value of genetic engineering, arguing that genetically modified organisms are just another variety of the reductionist, high-tech approach that has led to so many of industrial agriculture's worst abuses.

"People love technological fixes," she says. "But spending so much effort to produce these engineered varieties that then have severe vulnerabilities or cause new problems is not, I think, a very good strategy. I'd rather see that effort put into coming up with agroecologically designed communities that do the same thing — that use water and nutrients really efficiently."

Altieri, who calls agroecology "the antithesis of transgenic technology," says that "there is not one acre of transgenics that feeds the one billion poor people. Transgenic corn and soybean are produced to feed cattle that the poor cannot afford, and for biofuels, canola, and cotton that don't feed anybody." 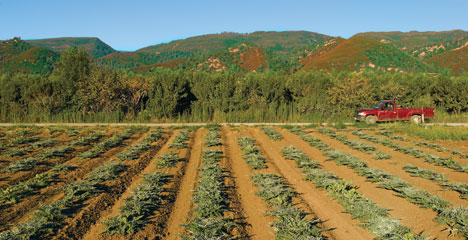 Creating and supporting diversified agricultural systems, both in developing and developed countries, will require a substantial investment in research, and not just in the natural sciences. Work in fields like economics, sociology, and public policy can help societies grow a sustainable, biodiverse system of food production and distribution that allows farmers to not merely survive, but thrive.

"Structurally, one of the biggest challenges to truly sustainable agriculture is the push to do everything as cheaply as possible," says Christy Getz, who studies farm labor conditions and other societal factors (see "The People Behind Our Food"). "Most profits in the organic sector go to the largest players in the food chain; very few small organic farmers make significant profits. Continued industrialization, concentration, and consolidation are changing the face of organic agriculture."

Another challenge is to identify the best methods for encouraging farmers in developed countries to switch from industrial to diversified farming practices, research that Iles, whose field is environmental law and policy, is pursuing (see "Getting the Policies Right"). Among the questions he's investigating are: How can farmer motivations be better linked to the science of agroecology? Through setting rules, or through creating economic incentives, or by creating peer pressure? How can we evaluate the effectiveness of different types of policies?

The goal of establishing the Center for Diversified Farming Systems is to close some of these research gaps — by providing a venue where scholars can share their work, and by helping to train future leaders in the field who in turn will translate agroecological scientific advances into practice. Ultimately, the aim of Kremen and her Berkeley colleagues is to create a place where ideas about how to create a sustainable future for human agriculture can be debated, and the best winnowed from the crop.