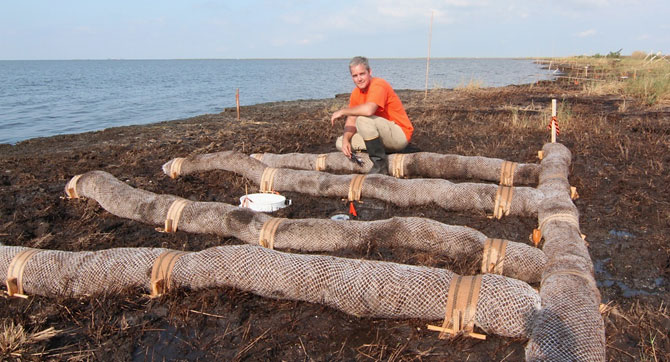 Thomas Azwell is testing bagasse-filled growth tubes as a clean medium for marsh plants in the Bay Jimmy Restoration Project in Louisiana. (Photo by Gavin Garrison)

BERKELEY — A graduate student at the University of California, Berkeley’s College of Natural Resources, deeply influenced by the Deepwater Horizon disaster, is helping to restore the Gulf’s blackened marshes with a project that could also aid threatened ecosystems nationwide, including in Northern California.

Partnering with researchers and agencies in the Gulf, Thomas Azwell is staking tubes of cotton netting stuffed with pre-composted sugar cane fiber into the dying marshes of Louisiana, testing whether the environmentally sustainable waste material can give a larger variety of plants a better chance at healing the oil-damaged wetlands.

Azwell, who worked as a mechanic in the 1990s on offshore oil platforms in the Gulf, said he wants to help something positive emerge from the largest environmental disaster in U.S. history and to apply his education at UC Berkeley for the public’s benefit.

“This is an incredible opportunity, and it’s part of our land-grant mission as a university, as a public university, to disseminate to the community the ideas we come up with in research laboratories, for the betterment of the community,” he said.

“Not only do we keep destroying so much of the marshes through oil spills and other environmental hits,” said Bea, “but nature is playing her hand, too, with very gradually rising sea levels.”

About 40 miles south of New Orleans, evidence of the April 20, 2010, oil spill, which killed 11 workers and spewed 5 million barrels of crude oil into the Gulf, is still on display through 10 miles of damaged shoreline in Bay Jimmy. 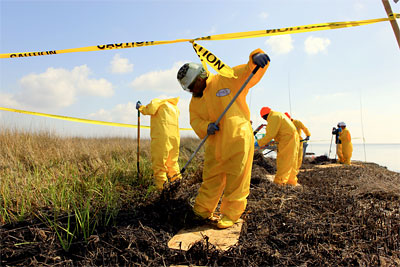 But there also are signs of hope. Dozens of marsh plants are growing out of long tubes staked into the heavily oiled marsh sediment as part of Azwell’s Bay Jimmy Restoration Project. Nearby, other test plots with different types of smooth cordgrass, Spartina alterniflora, are growing from the ground to see if they emerge as better candidates for use in marsh restoration.

Conventional marshland restoration has had limited success. It entails hand-planting marsh plants into the ground. The process is costly and labor-intensive, and a recent UC Berkeley study found that restored wetlands often fail to match the condition of the original marshes.

“Marshes are very critical to southern Louisiana,” said Azwell. “They provide habitat for juvenile fish, they provide storm surge protection from hurricanes and tropical storms, and they provide a way to manage nutrients and toxins that discharge out of the Mississippi River.”

Currently, he said, the only approved plant used for marsh restoration in Louisiana is vermilion, a robust, smooth cordgrass specially bred for disease resistance – but not proven to be oil-resistant. Azwell and his fellow researchers hope to find a more genetically diverse range of native plants that can survive in adverse environmental conditions and benefit restoration work nationwide.

Efforts to restore coastal wetlands in the San Francisco Bay in the early 1970s illustrate the dangers of introducing marsh plants into areas where they are not native. A type of cordgrass native to the Atlantic was used, and the plant subsequently ran amok and displaced the Bay’s native plants.

While driving past the sugar cane fields in southern Louisiana, Azwell saw the solution in mountains of sugar cane fiber, or bagasse, that is heaped up as waste behind the processing factories.

“There are 3 million tons of this piling up behind sugar cane factories each year,” he said, “and there’s currently no market for it.” 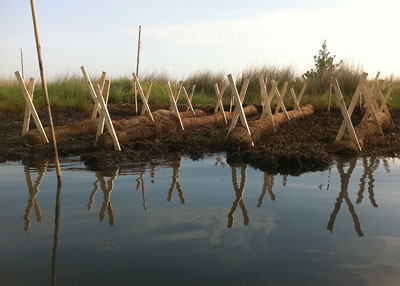 Pre-composted bagasse stuffed into tubes of cotton netting turned out to be a very effective potting soil, providing a clean growth medium for a larger variety of marsh plants. Root masses for these plants are placed into the tubes and then fastened to the ground. To get his project started, Azwell connected researchers from Tulane University with collaborators from the National Oceanic and Atmospheric Administration, the U.S. Coast Guard, BP operations and Nicholls State University. He also helped obtain permission from Conoco-Phillips, which owns leases on the land where the Bay Jimmy project is taking place, to use the marsh for research.

“A large part of this project would not have happened without Thomas,” said Michael Blum, a UC Berkeley alumnus who is now an assistant professor of ecology and evolutionary biology at Tulane and a co-researcher, along with his graduate student Brittany Bernik, with Azwell on the Bay Jimmy project.

Efforts to fund restoration ramp up

If the test plots lead to success, the restoration industry will have a larger portfolio of methods and new plant varieties to use, including approaches that could aid the restoration of California’s marshes In the Gulf area, said Azwell. Bagasse is locally produced, so its use in restoration would help support the local economy.

Searching for a California equivalent of bagasse would be a worthwhile effort, the researchers said.

Financing would come largely from penalties paid by the parties responsible for the Gulf spill. Among the hundreds of lawsuits filed in the wake of the spill is one beginning Feb. 27 in U.S. District Court in New Orleans. That trial will help determine the level of responsibility for the disaster, and could result in even greater fines for BP.

Last year Sen. Mary Landrieu (D-La) introduced a bill, S 861, to direct funds received from such penalties to the restoration of natural resources and the revival of the economy in Gulf communities affected by the Deepwater Horizon disaster. That bill now sits in the Senate Committee on Environment and Public Works.

One proposal relates to the use of bagasse as an absorbent for oil to support shoreline cleanup, and another involves tracking how plants sequester remaining oil in the marsh.

From research plots to the classroom

Apart from the Bay Jimmy Restoration Project, Azwell is putting his UC Berkeley training, which has included working alongside nationally recognized environmental experts like Bea, to further use in the world. 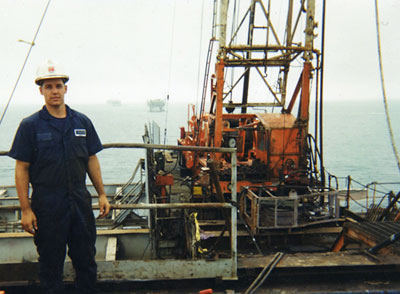 Even before Deepwater Horizon, Azwell’s research had focused on developing low-cost and environmentally-safe bioremediation technologies for hydrocarbons and toxins found in crude oil and sediments. After the Cosco Busan cargo ship collided with the Bay Bridge in 2007, spilling 53,000 gallons of heavy fuel into the San Francisco Bay, Azwell successfully tested the use of worms and compost to clean the soil.

As part of the Deepwater Horizon Study Group formed at UC Berkeley by Bea, Azwell led the group’s environmental analysis, which has posted its numerous reports online.

Azwell pointed out that the Gulf spill exposed the wide gap between the technology used to find and extract oil and that used to clean up and recover from spills. The response to the spill largely consisted of a combination of chemical dispersants, absorbent booms filled with polypropylene and fire to burn off the oil on the surface of the water.

“What you have in response to an accident is technology that hasn’t advanced much since 1989 with the Exxon Valdez,” said Azwell. “There’s an irony in the use of absorbent booms made of polypropylene to clean up oil spills since the material is a plastic made from fossil fuel.”

Last year, Azwell went on to develop and lead an educational outreach program with the California Academy of Sciences through the Wendy Schimdt X Challenge Oil Spill Video Contest. Local high school students created short videos about oil spills, their impact on the environment, and what each individual can do to prevent future spills.

Today, Azwell, with a UC Berkeley master’s degree in science education and experience teaching high school science, is working on a national challenge for kids to design interpretive displays on oil spills for their local science centers.  The displays would include a video game and virtual docents, developed by University of Southern California computer scientists, that teach about oil spill response and cleanup technology.

Researchers at the University of Southern California introduce their Virtual Human Museum Guides project, developed to enhance the experience of museum-goers. The USC researchers are now working with UC Berkeley’s Thomas Azwell to adapt the docents for use in interactive displays about oil spills. (Video courtesy of USC’s Institute for Creative Technologies)

Lake, Costner’s business partner at Blue Planet, said Azwell’s energy was the key reason the company threw its support behind the Bay Jimmy project, as well as the X-Challenge video contest.

“He completely educated me to the fact that there needs to be far more support for the sciences in universities,” said Lake, who was introduced by Azwell to UC Berkeley researchers and to its mission as a land grant university. “And through him, I became fascinated with where UC Berkeley came from as a school.”

The chair of Azwell’s dissertation committee, Garrison Sposito, professor in UC Berkeley’s Department of Environmental Science, Policy, and Management, said Azwell’s work in the Gulf illustrates the type of innovation among gifted students that UC Berkeley encourages and supports.

“Historically, UC Berkeley has always provided an environment that fosters personal initiative,” said Sposito. “There’s a strong motivation among our students to do research that is for the public good. I know that motivates Thomas. He really wants to benefit the public good through improving the environment.”