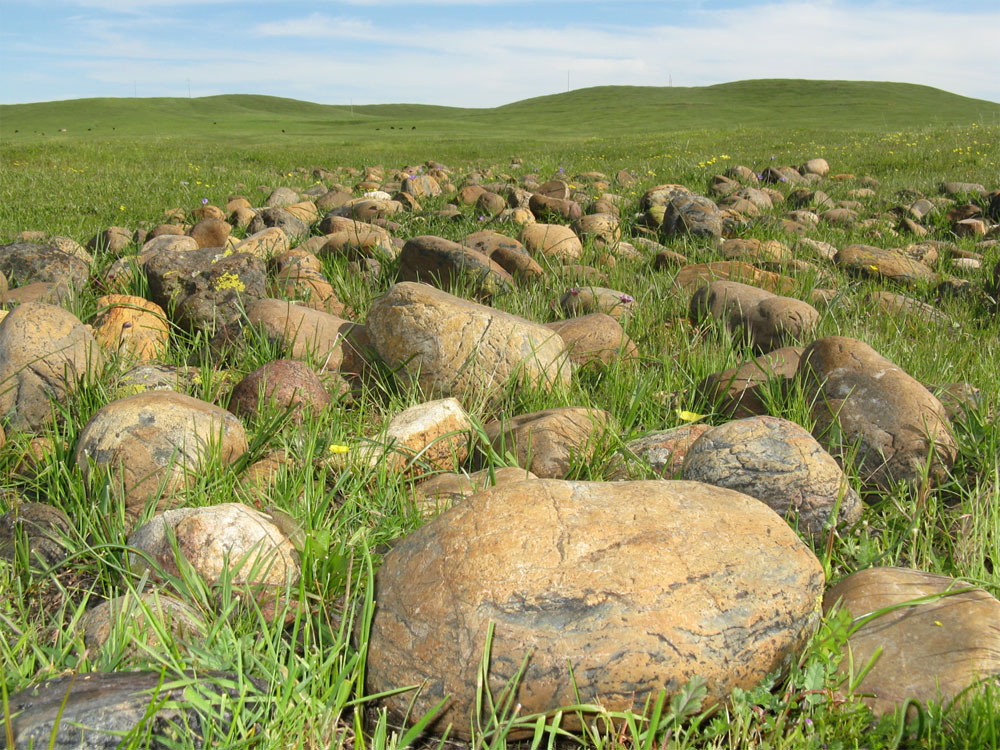 In this photo, taken about ten miles north of Merced, CA, the foreground shows the landscape of one of the oldest formations in the soil chronosequence: the approximately 1 million year-old North Merced Gravels formation. Large granitic cobbles and many unique plant and animal species are found in the vernal pools, which are directly adjacent to the small (~1m high and 10m in diameter) Mima mounds (not clearly shown in photo). The background shows the oldest formation in the chronosequence, the ~2 million year-old Laguna formation, which bears the largest and densest mounds in the chronosequence. Photo by Sarah Reed

Graduate student Sarah Reed of the Amundson Lab, explores the interplay between landscape and life by studying the exchanges and feedbacks between terra firma and the organisms that move and live within it.

In particular, she is investigating a unique oscillating landscape in California’s Central Valley: uplands called Mima mounds and swales called vernal pools. The vernal pools are seasonal wetlands that support a bounty of rare and endangered plant and animal species. Despite the biologic importance of these landscapes, the question of their origin is still not understood.

Sarah is using a combination of remote sensing, spatial pattern analysis, geomorphic modeling, and soil and biologic field monitoring to test a hypothesis which proposes that burrowing animals create and/or sustain the mound-pool terrain by moving soil in response to environmental changes (e.g., perched water tables) that occur as a result of soil formation processes.

Sarah’s research includes one of the largest remaining tracts of mounds and pools near Merced, CA on a series of five river terraces which range in age from 0.02 to 2 million years. Each of the terraces represents a key stage in soil formation–as soils age, impermeable subsurface layers (such as duripans) develop, causing a seasonal perched water table to form.

She expects that near-surface hydrology will systematically change as landform age increases, causing changes in soil conditions. In turn, she anticipates biology to respond to changes in predictable ways across the sites, ultimately leading to the mound-swale terrain.

The motivations for this research are: (1) to help solve one of the longest-standing geomorphic puzzles (Mima mound-vernal pool origin), (2) to contribute to the development of a scientific-based management strategy for these landscapes and (3) to quantify the linkages and feedbacks between landscape and life, i.e., if and how landscape evolution and biogeochemical processes ultimately lead to habitat development and biodiversity.