BERKELEY — Fighting fire with fire has been given the green light by a new study of techniques used to reduce the risk of catastrophic wildfires. And with a rise in wildfires predicted in many parts of the country, researchers say controlled burns and other treatments to manage this risk should be stepped up. 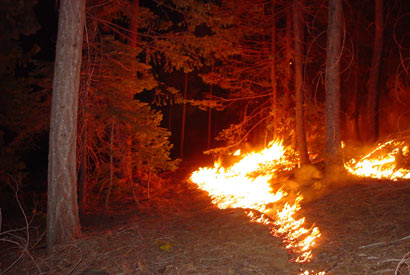 The paper, published in the June issue of the peer-reviewed journal BioScience, and led by researchers at UC Berkeley, synthesizes 20 years of research throughout the country on the ecological impact of reducing forest wildfire risk through controlled burns and tree thinning. It comes as California braces for a potentially bad fire season, particularly in the southern Sierra where precipitation was half its normal level. “We need to act, because climate change is making fire season longer, temperatures are going up, and that means more fire in many regions, particularly ones with a Mediterranean environment,” said lead author Scott Stephens, UC Berkeley associate professor of fire science. The study authors, which included scientists from the U.S. Forest Service and six research universities in the United States and Australia, relied upon data from the U.S. Fire and Fire Surrogates Study, in addition to a wide range of other studies. Together, the studies represented a broad spectrum of ecological markers, detailing the effects of fuel-reduction treatments on wildlife, vegetation, bark beetles, soil properties and carbon sequestration. “Some question if these fuel-reduction treatments are causing substantial harm, and this paper says no,” said Stephens. “The few effects we did see were usually transient. Based upon what we’ve found, forest managers can increase the scale and pace of necessary fuels treatments without worrying about unintended ecological consequences.” A few of the researchers’ specific ecological findings include:

The results of this paper may help inform an analysis of one of the larger prescribed fires in the history of the U.S. Forest Service. Called the Boulder Burn, the proposed treatment covers 6,000-9,000 acres in the Southern Sierra Nevada’s Sequoia National Forest and is tentatively set to begin by late fall. “This paper is more comprehensive and definitive than any other article I’ve seen,” said Malcolm North, research scientist with the U.S. Forest Service and an associate professor in forest ecology at UC Davis. “In one place, it summarizes the state of the science in fuel-reduction treatments, and to my mind, it shuts the door on those who say that any type of fuels treatment is detrimental to the forest. If done properly where surface fuels are reduced, treatments work. It’s time to get on with it.” 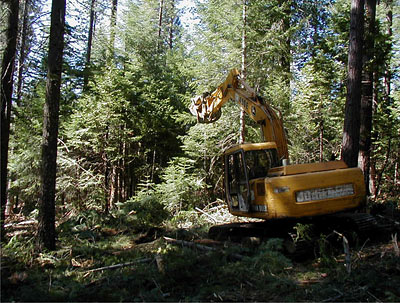 Nearly a century of fire suppression and the preferential logging of large-diameter trees, which are better able to withstand forest fires, have left forests vulnerable to more destructive, albeit less frequent, wildfires, the researchers said. In addition, the lack of fire has hindered nutrient cycling in forests and the proliferation of certain plant species, such as the sequoia, that rely upon fire to promote seed dispersal. This realization led to the gradual re-emergence during the past 20 years of fuel-reduction as a forest management tool. The goal is simple: Thin or remove dense stands of trees, ground vegetation and downed woody debris in a carefully controlled way before they become fuel for a raging wildfire. When low- or moderate-intensity controlled burns are not an option, fire-prone trees are mechanically removed or shredded on site. Such techniques are an attempt to emulate the frequent fires common in California for thousands of years. Before 1800, Stephens said, an estimated 1.1 million acres of forest burned annually in California, including wildfires ignited by lightning and other natural sources, and blazes set intentionally by Native Americans as a way to manage or alter landscapes. Most were blazes of low-to-moderate intensity that more than 80 percent of the trees could survive, unlike the catastrophic wildfires of modern times. “Today, the combination of wildfires and fuel-reducing treatments only touch 6-8 percent of the land that used to burn annually before 1800, and fuel-reducing treatments alone only affect 1 percent,” said Stephens. “That’s a pittance. At that level, it’s just triage rather than fire prevention.” To approach levels that have a chance of reducing wildfire risk in the long term, he said, the amount of land to be treated in a year would need to increase by 2-4 percent — still low compared to historical levels. Stephens noted that two-thirds of the fuel-reduction treatments in the western United States rely upon mechanical thinning, which would be much more costly than prescribed burns to scale up. In the southeast region, the use of prescribed fire dominates. In the West, particularly in California, the biggest challenge to expanding controlled burns is the potential reduction in air quality during treatment, said Stephens. “We have a choice,” he said, “of dealing with lower levels of smoke from prescribed fires that may only be needed every 15 years or so, and which can be timed for optimum wind conditions, or acute levels of smoke from catastrophic fires that can last for months when they hit.” The U.S. Department of Agriculture-U.S. Department of the Interior Joint Fire Science Program helped support this research.