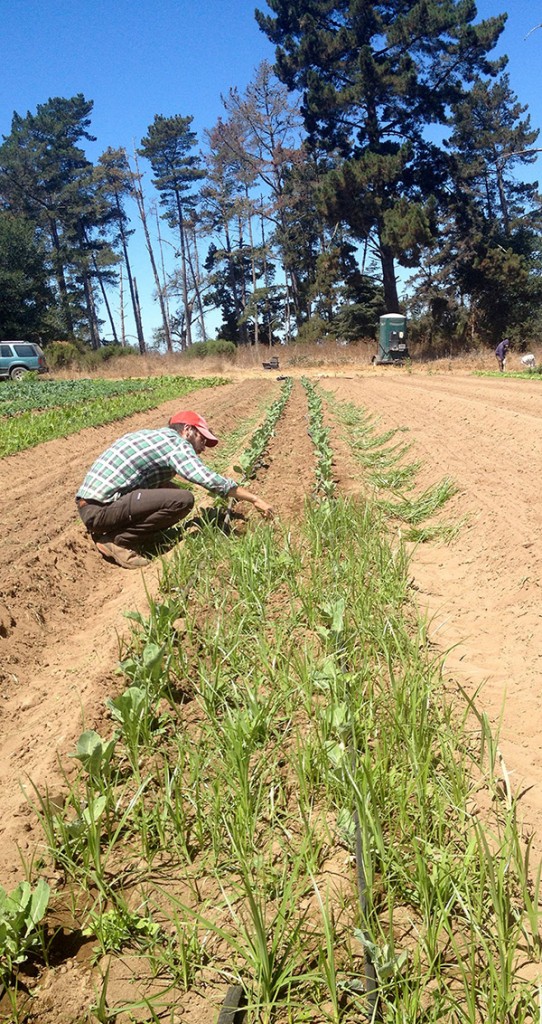 One day shortly before I was off to university, I noticed my father pacing about like he does when he has something of grave import to declare.  He sat me down, put his arm straight against my shoulder, and began to lecture.

“Son, whatever you decide to study, I forbid you from choosing something that involves stories. This includes the arts, literature, film...anything where people try to tell you the truth instead of letting facts speak for themselves.”

"You must study something real,” he said.

This was a powerful coming of age moment, like when the orphaned Pip from Great Expectations suddenly learns he is to abandon his current path of blacksmithing and move to London to become a gentleman.

You see, my father made his career on stories, first producing television news in New York City then teaching broadcast journalism at Cal. It was typical of his self-deprecating style to obliterate the ground he was standing on to make a point. It was a brilliant tactic, for I could rebel his legacy by making my career out of something antithetical to the TV business and at the same time do exactly his bidding by taking on an area of the hard sciences.

So I dove into ecology, feeling smug that I could look down my nose upon the humanities. I read E.O. Wilson and Dan Janzen, Paul Ehrlich, Paul Farmer, Watson and Crick. Mark Kurlansky’s one-line nonfiction titles lined my sparse college bookshelf ordered by page size like Russian dolls. A favorite New York Times op-ed titled “The Hubris of the Humanities” lay permanently printed out on my desk as a reminder of the danger in finding truth through stories. I was big on watershed modeling and population viability analysis. I did experiments on mosquito oviposition in bromeliads. How could media, so awash in conflicting narratives and symbols, address climate change or habitat destruction? What did narratives have on conservation genetics? If only bias could be removed through objective knowledge, I thought, sound science-based policies could be the new norm in a rational and logical world.

But I had a problem. I grew up on stories. I come from a family (my sisters both studying film and making documentaries) where the turn of a witty phrase was worth ten times more than a well-researched statistic. This rift was compounded by some inconsistent experiences in my siloed academic career. While studying Culicidae in Costa Rica, a coffee farmer told me a story that seemed to question the value of all of the Simpsons Diversity Index calculations I was diligently undertaking.

He told me recent success of his shade coffee operation had garnered the attention of Café Britt, which you could fairly call the Starbucks of Latin America.  Some big time representative from the company drove up the mountain to Monteverde where the farmer was growing his beans. The Café Britt rep, arriving in a sleek luxury vehicle, was there to make him a lucrative offer to buy his label. The farmer hemmed and hawed, asking the company man a series of questions about the consequences of the deal; then he was interrupted by the man in the suit.

“I choose the ox!” the farmer said “Its better on these mountain roads anyway.”

This was a narrative of privilege, the logic of capital, alternative agriculture, and visions of progress—all embodied in an image of the ox versus the luxury machine. This was a story that transcended the narrow science of tropical ecology despite its powerful justifications for smallholder farming. Yet, in that moment the story seemed all the more valuable than my paired t-tests and butterfly transects.

The more I studied the biophysical sciences the more I discovered that the sciences have their hubris too. Just as the humanities risk abstraction and distortion of important concepts through murky and contradicting narratives, science excludes too many forms of knowledge from what is considered legitimate, creating boundaries and barriers to the “club of the expert.” I started to wonder if my science could bring in a little narrative, tacit understandings and emotional tugs, and still not forfeit its validity. I wondered if the protective barrier of "real science" could be broken down and the power of the practice redistributed. I realized that science is just another form of narrative; it is wholly comprised of stories that are fought over endlessly through graphs and charts and impressive bibliographies.

Thankfully, I have been preceded by a great number of scholars who have felt the same desire to complicate the meaning of scientific practice not as a critique, but as a way of improving its democratic character. These days, my reading list has included titles like Corburn’s Street Science, Fals-Borda’s Investigación Participativa and Fricker’s Epistemic Injustice.

Bolstered by this growing evidence in the value of participatory approaches I notice that ESPM is cautiously exploring the actual work of operationalizing these visions of a democratic science. It appears in a variety of forms throughout the department as citizen science, community GIS (Geographic Information Systems), a special publication on scholars who 'give back’ to their research communities, the proposed use of UC agricultural land as a joint university and community research space, and so on.

Another great example is the pilot program for Graduate Students in Extension (GSE), of which I am lucky enough to be a part. Cooperative Extension historically represented a method of after-the-fact translation of science to action. The land grant universities were tasked with taking the science of the universities untouched by the messy practical world, and bringing it to the landed peoples of California. Perhaps Cooperative Extension contributed to the dominance of “science-based” agriculture we see today. By promoting farming methods based on controlled crop experiments and pesticide recipes, Cooperative Extension encouraged industrial and agricultural practices as well as justified them with their expert status. 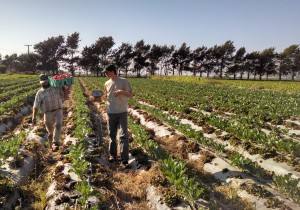 Working and conversing with growers during their daily farm operations is the first phase of the research. Here, Ph.D. student Robert Parks helps with a strawberry harvest.

A new guard of extension specialists, however, is aware of the epistemic injustice of creating knowledge in a privileged silo then “giving” it to the non-expert as a prescribed package of truth to ingest. They think a new definition of extension means doing science with and in service of communities that are constantly embroiled in complex environmental challenges. It is from this stance that I view my work with the GSE: to do the work of extension through participatory inquiry instead of after the fact through educational materials or official reports. Reading about participatory inquiry in Freire’s Pedagogy of the Oppressed is one thing; putting it into practice is another. I have been humbled in trying to enact these ideals of emergent dialogue and praxis in my work with small-scale growers in the California Central Coast. An early taste of challenge was when I finally relented my original focus on new and restrictive food safety regulations when growers who I talked to simply didn’t view the challenge of doing more paperwork as a root barrier to their success as organic farmers. 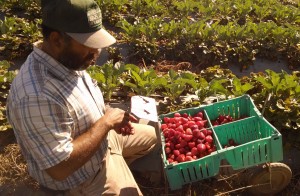 A grower slices the tops of his organic strawberries in preparation for sale to the local cannery. He says they will be made into all sorts of things including jams, popsicles and shampoos. He can sell these berries to the cannery for 48¢ to 98¢ per pound. Salinas, CA

Instead, our new focus is on land access for small-scale growers. We will use participatory mapping techniques to analyze trends in land availability and productive quality, in hopes of surfacing marginalized voices in the case for reform of regional land policies. We purposely use mapping as a research medium because of its qualities to represent narratives as well as traditionally held objective data. While this has been a major shift in research, I take it as a concrete sign that the power of defining what is a problem is now a little less situated in the university and more grounded in a traditionally overlooked community. If there may be any indicator of democratic participation in science, it may be by looking at how much power the researcher has at the beginning and at end of the process. When I spent a few hours hand weeding a row of squash in order to make up for the time I was going to take from a grower for an interview, I started to think that maybe I was headed in the right direction. One of the key principles of participatory research is that the ultimate benefits may not be the intended or measurable outcomes written in a grant beforehand. For me, the idea that bringing together growers to investigate land access may result in new coalitions, unexpected ideas, and bottom-up strategic networks is an idea that reinvigorates my belief in science as change agent. My father was concerned that truth and meaning were too easily distorted by narratives, as evidenced by repeated cycles of out-of-context sound bites on TV news. He thought that stories ought to yield to scientific rigor and rationale for a more equitable world. In the end, without awareness of the embedded stories within the practices of inquiry, science simply serves the same purpose as talking heads on TV: to uphold a privileged vision of society.