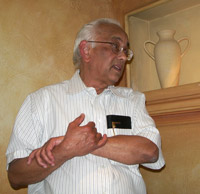 T.N. Narasimhan, passed away on Friday morning 29 April 2011 at Stanford University Hospital. He battled lymphoma bravely and nobly for nearly ten months keeping his usual positive, upbeat spirit through a series of treatments, surgeries, and recoveries of increasing rigor.

T. N. Narasimhan obtained a B.Sc. (Hons) degree in Geology from the University of Madras (1956), and an M.S.(1971) and a Ph. D. (1975) degree, both in Engineering Science, from the University of California at Berkeley. He began his career at LBL in April of 1976, being an integral part of the formation of the Earth Sciences Division. His career had been devoted to the study of water, including its scientific, engineering, cultural, human, and policy aspects. The study of the nature, occurrence and movement of water in earth systems has led him over the past ten years to take a serious interest in the evolution of ideas related to diffusion, over the past two centuries.

Nari is survived by Vijayalakshmi (Vijaya) to whom he was married for over 48 years, and his son, Ravi.