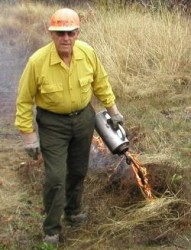 Robert (Bob) E. Martin was born on January 9th, 1931 and passed away on October 12, 2013 in Grants Pass, Oregon. He was a professor of Fire Science in the department from 1983-1994. Bob was a master prescribed burner and worked throughout his career to improve fire science and to connect the research that he directed to managers. Bob always brought his quantitative background to the wildland fire field.

Bob began his career in 1960 as a Research Forester at the Southern Forest Fire Laboratory in Macon, GA. Macon was a hot-bed of innovation in fire research in the US at this time and Bob was able to work with many leading scientists. In 1963 he moved to Virginia Tech University in Blacksburg where he was assistant, associate, and full professor until 1971. He then decided to move out west and in 1971 took the position of Project Leader, Cooperative Fire Management and Science Project, US Forest Service, and Professor of Forest Fire Science, University of Washington, Seattle. At Washington he began his career advising graduate students in the fire science area. In 1975 he took another US Forest Service position as Project Leader, Silviculture Laboratory, Pacific Northwest Forest & Range Experiment Station, in Bend, OR. This lab developed prescribed fire prescriptions and ecological information of fire effects in eastern Oregon. Bob also worked tirelessly to keep this lab open when it was identified for closure. In 1983 he accepted the position of Professor of Fire Science at the University of California, Berkeley, retiring in 1994. He served as deputy chairman, vice chair, and chair of the IUFRO Fire Research Group for many years. Bob worked as the major professor of 28 graduate students over his career.

Bob received two national awards, The Barrington Moore Award from the Society of American Foresters, in 1996 “…for outstanding achievement in biological research contributing to the advancement of forestry” and the inaugural Harold Biswell Lifetime Achievement Award from the Association for Fire Ecology, in 2003, “In recognition of a lifetime, significant contribution to fire ecology and management in the United States.”

John Dell worked with Bob for many years and they taught prescribed fire classes together. The classes were normally 1 week long, and were mostly run from Pringle Falls Experimental Forest and the Deschutes National Forest. The workshops were always hands-on. The first day was an introduction to prescribed fire, the 2nd day was a trip to the field to observe a demonstration burn, and then a return to the classroom for the next 2 days for the students to create a burn plan. Then last day they went back to field and the students would implement a prescribed fire.

Bob was quoted by Les Joslin as saying “I think the last year I was in Bend that somewhere between 50,000-100,000 acres of understory burning occurred. So from 1975-1982 we got a hundred fold increase in the amount of prescribed burning being done.” This was a great accomplishment. Bob also burned almost every year with his undergraduate classes at UC Berkeley, many time in the Berkeley hills above the campus.

Each time Bob took his students to do a prescribed fire he would ask everyone one question to begin: “Where are your matches?”

Bob had a big heart and always looked out for his students. He always had a smile and was a great mentor.