In Memoriam - Evert I. Schlinger 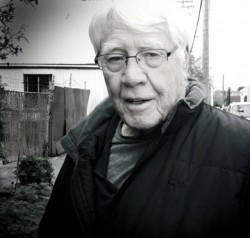 Dr. Schlinger, who received his undergraduate degree from UC Davis and then his doctorate in entomology in 1957 from UC Berkeley, was a world authority on a very rare, world-distributed group of spider-parasitoid flies of the family Acroceridae. His dissertation, available in the UC Davis Shields Library, was on "A Generic Revision and Catalogue of the Acroceridae (Diptera)."

He collected specimens on 37 insect-spider expeditions in 40 countries. His World Spider-Endoparasitoid Lab, located in Santa Ynez, Calif., was most recently associated with the UC Santa Barbara Department of Biology. The UC Berkeley Essig Museum houses the Evert I. Schlinger Aphid Parasitoid Collection.

Born April 17, 1928 in Los Angeles, Evert or "Ev" as he was known, spent almost 20 years at Berkeley where, before retiring in 1986, he served as chair and vice-chair of the Department of Entomological Sciences, and later as chair of the Department of Conservation and Resource Studies. His accomplishments include development of field entomology courses and field arachnology, and research on biological control and the biosystematics of parasitic flies.

The philanthropist funded professorships at universities across the U.S. with millions of dollars from his family foundation, including the Schlinger Chair in Systematic Entomology at UC Berkeley and the Schlinger Chairs of Arachnology and Diptera, as well as postdoctoral fellowships in Arachnology and Entomology at the California Academy of Sciences.

Michael E. Irwin, professional scientist emeritus at the Illinois Natural History Survey emailed members the department of Environmental Science, Policy and Management as well as many of Schlinger’s colleagues and friends:

"Evert I. Schlinger passed away during the lunar eclipse in the early morning of Wednesday, October 8, 2014. He was a giant of a man in both stature and accomplishment. He fought for advancing science and improving the environment all of his life. He had a laser-like ability to dissect problems and find solutions. He was gentle, caring, yet held strong convictions. His work in the systematics of the small-headed fly family Acroceridae was deep and provided the foundation for future workers; his work in biological control was less known but profoundly influenced the course and development of integrated pest management. Perhaps his greatest gift to science was a cadre of students that have made impacts in many areas of entomology and education. For me, he will always be remembered as my best friend and a great mentor."

Bob Lane, Professor Emeritus of Medical Entomology remembers, "Evert Schlinger was not only a world-class insect systematist, he was a true gentleman as well. He went out of his way to support and nurture graduate students—he understood the milk of human kindness. Ev will be missed, though his legacy will endure by the positive influence he had upon the lives of those who had the pleasure of knowing him."

His daughter, Jane, said her father "started his career collecting black widows at schools at the age of 9."  She recalled that in addition to his love of family and science, he "loved to sing and had a love for opera--he attended the San Francisco Opera performances a lot."

This article was adapted from Kathy Keatley Garvey’s piece on the UC Entomology & Nematology News site.