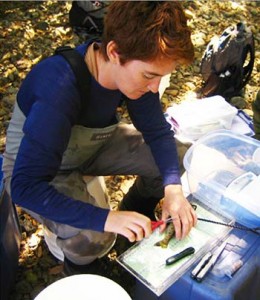 Stephanie Carlson with a juvenile fish. Photo by Jason Hwan.

Coho salmon and steelhead trout breed in the streams of Central California that summer turns into trickles and pools. Two- to four-inch juveniles, hatched in early spring, remain for a year or two before heading out to sea. By the end of summer, their survival is challenged by low water levels and rising water temperatures.

The fish are native and have adapted to dry spells. But the state’s ongoing drought, and the growing water demands of agriculture and a changing climate, are creating a “knife edge” of survival for the fish, says UC Berkeley fish ecologist Stephanie Carlson, an assistant professor in the Department of Environmental Science, Policy and Management in the College of Natural Resources.

Carlson’s lab group is studying several small salmon streams in West Marin to determine the water levels needed to sustain salmon and trout through summer. Her research is supported by Berkeley’s Rose Hill Innovator Program, which funds novel research in science, math and technology. Carlson also plans to expand the research into even drier regions, including Coyote Creek near Gilroy, where several native fish species are concentrated into shrinking pools during the summer.

“Coho and steelhead have probably relied on these streams for breeding and rearing for thousands of years,” Carlson says.  “We hope our research can help assure their survival into the future while still providing water for other uses.”

Read the full story by Wallace Ravven on the website of the UC Berkeley vice chancellor for research.