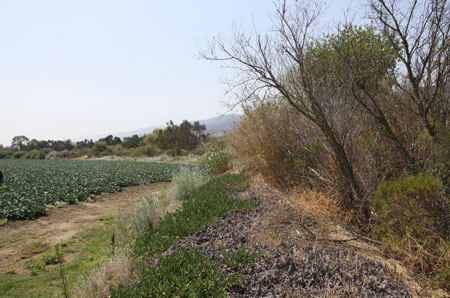 Natural and semi-natural habitat lies next to a broccoli field in the Salinas Valley. (Photo by Daniel Karp)

The effort to improve food safety by clearing wild vegetation surrounding crops is not helping, and in some cases may even backfire, according to a new study led by researchers at UC Berkeley.

The findings, reported today in the journal Proceedings of the National Academy of Sciences, call into question the effectiveness of removing non-crop vegetation as a way to reduce field contamination of fresh produce by disease-causing pathogens. This practice led to extensive loss of habitat in a region that is globally important for food production and natural resources.

The practice was implemented largely in response to a 2006 outbreak of pathogenic E. coli in packaged spinach that killed three people and sickened hundreds of others in the United States. That outbreak was traced to a farm in California’s Central Coast, a region that supplies more than 70 percent of the country’s salad vegetables. The disease-causing E. coli strain was found throughout the farm environment — including in the feces of nearby cattle and wild pigs — but the cause of the outbreak has never been officially determined.

“Wildlife took much of the blame for that outbreak, even though rates of E. coli in wildlife are generally very low,” said study lead author Daniel Karp, a NatureNet postdoctoral research fellow in UC Berkeley’s Department of Environmental Science, Policy and Management and The Nature Conservancy. “Now, growers are pressured by buyers to implement practices meant to discourage wildlife from approaching fields of produce. This includes clearing bushes, plants and trees that might serve as habitat or food sources for wild animals. Our study found that this practice has not led to the reductions in E. coli and Salmonella that people were hoping for.”

Instead, the study authors noted that the presence of diverse habitats bordering food crops can actually provide a number of agricultural benefits.

“There is strong evidence that natural habitats surrounding crop fields encourage wild bee populations and help the production of pollinated food crops,” said study senior author Claire Kremen, a UC Berkeley professor of environmental science, policy and management. “There have also been studies that suggest that a landscape with diverse plant life can filter out agrichemical runoff and even bacteria. Changing this dynamic shouldn’t be taken lightly.”