An Interview with Carolyn Merchant 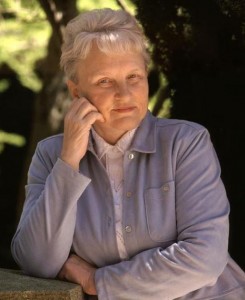 ESPM professor and environmental historian Carolyn Merchant has focused her career on the study of the relationships between humanity and nature, with a particular emphasis on gender and the environment. She is the author of The Death of Nature: Women, Ecology, and the Scientific Revolution; Ecological Revolutions: Nature, Gender, and Science in New England; Radical Ecology: The Search for a Livable World; and Reinventing Eden: The Fate of Nature in Western Culture, among other books, and numerous articles on the history of science, environmental history, and women and the environment.

Q 1: Your new book says that the relatively new sciences of chaos and complexity theory are creating a paradigm shift for twenty-first century humanity. How are these theories changing the way we think about and interact with nature?

In Autonomous Nature, I argue that twenty-first century humanity is in the throes of a paradigm shift, one that is triggered by two factors: the rise of the new sciences of chaos and complexity and climate change as the most widespread catastrophe for the human future. Chaos and complexity, unlike the more mechanistic sciences of the past, challenge our ability to predict with perfect certainty. Because chaotic systems are sensitive to initial conditions, uncertainty increases exponentially with elapsed time. Complexity, which deals with an extremely large number of dynamic sets of relationships, limits the degree of predictability. Because climate change is both global in scope and cumulative in effect, it reflects these uncertainties and limits to predictability. New ways of living within the everyday world are therefore needed.

Autonomous Nature explores the prehistory of chaos and complexity theory from ancient times in the Western world to the (so-named) Scientific Revolution of the seventeenth century. I look at ideas of an unpredictable, unruly, and recalcitrant nature that captured the imaginations of ancient, medieval, and early modern European peoples and triggered efforts by seventeenth and eighteenth century scientists to find ways of predicting and controlling the world around them. In so doing, I hope to cast a new light on ways of thinking about nature and science in the past. 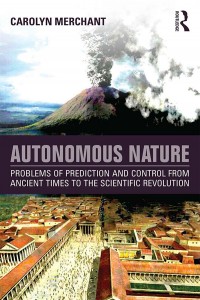 Q 2: As a part of this paradigm shift, you also mention climate change as the most widespread catastrophe of the human future. How can our conception of and narrative about nature affect how we approach climate change?

A major reason that I believe a history of unpredictability is important is the role that natural disasters and climate change play in the twenty-first century. Unpredictability is especially apparent in events such as hurricanes, tornadoes, earthquakes, droughts, and floods. And although climate change is largely anthropogenically caused and scientists can model and predict much of its extent, many outcomes are the result of unanticipated tipping points and complex cascading effects that, even if predicted, cannot be controlled. Because of the complexities of oceanic and atmospheric interactions, the moments, locations, results, and long-term effects of weather and climate make decision-making highly problematic. The skepticism of climate-change doubters and the seeming inability of some lawmakers to promote the technologies and develop the regulations to manage and control changes and to prevent them from affecting individuals, communities, markets, and governments is of paramount concern. The long-term future of the earth itself is at stake.

Q 3: In what ways is this new book a continuation of your previous work in environmental history?

Since the early 1990s, I have been writing about nature as an autonomous actor especially in relation to environmental ethics. At the Earth Summit in Rio de Janeiro in 1992, I formulated what I called a “partnership ethic” in which “humans as the bearers of ethics, would acknowledge nonhuman nature as an autonomous actor that cannot be predicted or controlled except in very limited domains.” Here both people and nature are in interaction with each other. My partnership ethic holds that “the greatest good for the human and nonhuman communities is in their mutual living interdependence.”

In The Death of Nature, I wrote about the idea that nature, depicted as a female during the Renaissance, seemed not only to be the instrument of God, but also to exhibit a will of “her” own. Since then, as I have investigated the origins of chaos and complexity theories that emerged in the 1970s and 1980s, I have returned to the history of nature depicted as willful, unlawful, and hence unpredictable.

Q 4: You write in the preface that Autonomous Nature is intended for “those with a background in the humanities, social sciences, and the sciences,” and you often collaborate with scholars from other disciplines, including experts in English, rhetoric, and comparative literature. How do you see interdisciplinary connections as important to your research and to the work of all those working in environmental fields?

I have always had an interest in the sciences and humanities. As a chemistry major in college, I took a lot of philosophy and physics courses and then did a Ph.D. in History of Science. My first academic position was at the University of San Francisco in the Physics Department teaching courses in physical science for humanists, science and society, and history of science. My position here at Cal is in environmental history, philosophy, and ethics. How science offers a lens onto history and how philosophy helps to raise questions about science is an intersection that has always fascinated me.

Q 5: You’ll also be co-teaching an interdisciplinary graduate course on “The Fate of Nature in the Anthropocene” during Spring 2016. Can you give us a sneak peek at what that course will involve?

The earth—as we know it today—may cease to exist in the future. With this possibility arises the pressing need to rethink nature in the Anthropocene—the era in which human activities have had a significant impact on the earth’s ecosystems, especially since the advent of James Watt’s steam engine in the late 1700s. “The Fate of Nature in the Anthropocene” Collaborative Research Seminar brings together faculty and graduate students from the humanities and environmental sciences to develop a theoretical framework for the environmental humanities and to examine possibilities for an integrated approach to the recent environmental turn in the humanities.

“The Fate of Nature in the Anthropocene” explores the complex meanings of the term Anthropocene and considers new and plural understandings of nature, the nature-culture web, and a post-human techno-nature. The term Anthropocene will be taken as shorthand for a series of ecological and social crises facing humanity in the twenty-first century and beyond. Through the lens of the Anthropocene, the seminar will address key issues for the environmental humanities, such as climate change, energy sources, biotechnology, agricultural production, and environmental justice, and investigate how new theories of ethics and justice can be made applicable to resolving large-scale, complex environmental problems.

Q 6: When you aren’t working on research or teaching, what are you reading these days?

Naomi Klein’s This Changes Everything: Capitalism vs. The Climate (2014). She shows how environmental disasters, climate change, inequality, and indigenous peoples are all connected to the capitalist craze for fossil fuels. Matthew Stewart’s The Courtier and the Heretic: Leibniz, Spinoza and the Fate of God in the Modern World (2006). Stewart presents a dramatic, gripping look at how Spinoza’s idea of God in Nature (pantheism) forced Leibniz to rethink his worldview and retool his own philosophy. Beatrix Beisner and Kim Cuddington’s Ecological Paradigms Lost (2005). In their edited book, these two women ecologists challenge classical traditions in ecology, elaborate on postmodern ecology as a pluralism, and develop “methods to cope with problems that are both highly uncertain and difficult to control.” (p. 390)

Q 7: What advice do you have for students concerned with making a difference for the environment? Do you have any specific advice for women starting careers in environmental science, history, policy or ethics?

Whatever career path you take, in addition to personal lifestyle choices, try to work with an environmental organization on an issue you are passionate about. For women, try to find a friend or partner who can help with and support the home within the larger home (the oikos, ecology).