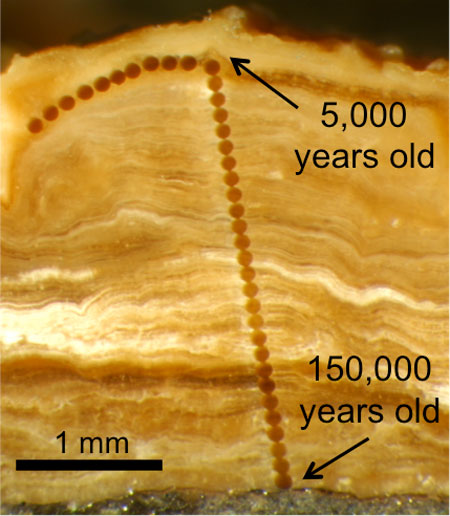 Magnified photograph of a cross-section through a 3 mm-thick pedothem soil deposit from Wyoming. The line of dots are laser ablation sampling spots that are 0.1 mm in diameter. The innermost mineral material is about 150,000 years old, and becomes progressively younger towards the outside. (Photo by Erik Oerter)

Scientists have found a new way to tease out signals about Earth’s climatic past from soil deposits on gravel and pebbles, adding an unprecedented level of detail to the existing paleoclimate record and revealing a time in North America’s past when summers were wetter than normal.

A research team led by UC Berkeley soil scientists obtained data about precipitation and temperature in North America spanning the past 120,000 years, which covers glacial and interglacial periods during the Pleistocene Epoch. They did this at thousand-year resolutions — a blink of an eye in geologic terms — through a microanalysis of the carbonate deposits that formed growth rings around rocks, some measuring just 3 millimeters thick.

“The cool thing that this study reveals is that within soil — an unlikely reservoir given how ‘messy’ most people think it is — there is a mineral that accumulates steadily and creates some of the most detailed information to date on the Earth’s past climates,” said senior author Ronald Amundson, a UC Berkeley professor of environmental science, policy and management.

The study, published today in the Proceedings of the National Academy of Sciences, shows the rich potential held within soil deposits known as pedothems, which form growth rings on rocks. The samples used in the study came from Wyoming’s Wind River Basin.

Because these soil deposits are commonly found in drylands all over the world, they can provide a rich source of data for paleoclimatologists, the authors said.

“We can now begin to develop records of how local and regional climate boundaries have shifted through time and in response to worldwide warming or cooling,” said study lead author Erik Oerter, who conducted the research as part of his UC Berkeley Ph.D. dissertation...

Read the research - Proceedings of the National Academy of Sciences