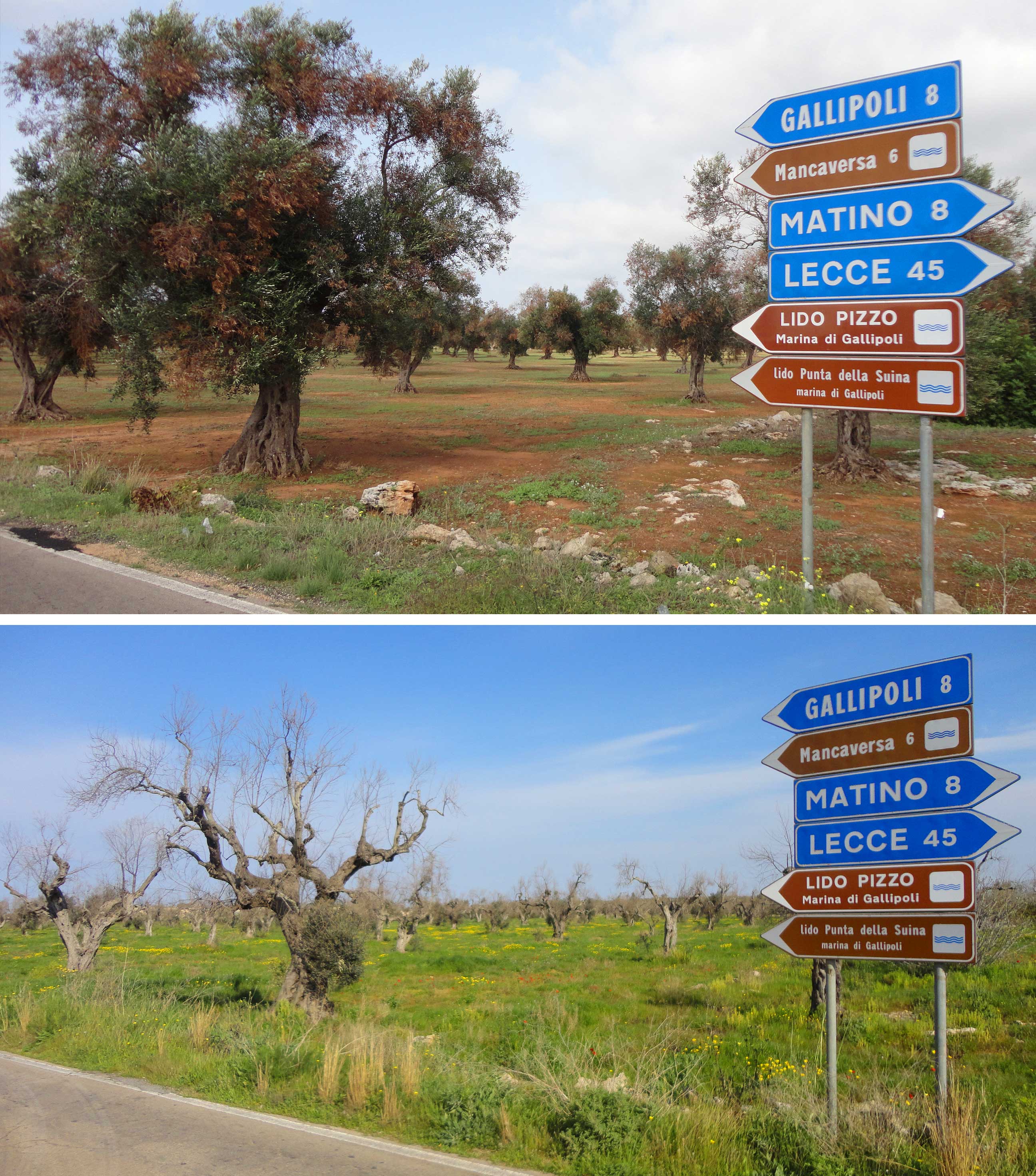 Photos of the same olive orchard in Apulia in October 2013 and March 2016 illustrate the development of intermediary disease symptoms into virtually dead plants in less than three years. Photos by Donato Boscia.

In southern Italy’s region of Apulia, the plant pathogen Xylella fastidiosa is threatening the famous, generations-old olive trees that attract tourists and provide income to the rural communities there.

A commentary published today in Science by Rodrigo Almeida, associate professor in the Department of Environmental Science, Policy, and Management, provides a background on the situation—and explains why stopping the spread of the disease is especially challenging.

After the pathogen was first detected in Italy in 2013, researchers determined that X. fastidiosa was likely introduced via contaminated plant material from Costa Rica. Since May 2015, the import of coffee plants from Costa Rica and Honduras into the EU has been forbidden.

However, much damage has already been done. X. fastidiosa—which causes serious diseases in both crop and ornamental trees and plants—is spreading quickly. Unlike most bacteria that cause plant diseases, this pathogen can multiply within most plant species instead of just a few, and “host” plants usually show no symptoms until months after being infected. In addition, a large number of insect species can transmit the disease from host to host. All this makes X. Fastidiosa very difficult to detect and contain.

The European Court of Justice has mandated actions to control the disease, which is also present in France, through a combination of insect population suppression and removal of infected plant material. But in Italy, where olive trees take a prominent role in the cultural heritage and local economy, there is much resistance to any tree removal.

Almeida writes, “...the disease is killing irreplaceable trees, including those planted to mark the births of family members for generations.”

Political leaders in Italy are reluctant to make unpopular decisions and the judicial system has been slow to respond; meanwhile, the pathogen spreads. Almeida notes that this epidemic can be an example of the need for better global strategies to manage emerging disease and pest problems, which are exacerbated with international trade.

In Apulia, Almeida says, the situation is dire: “The area impacted by the disease is expanding, and the consequences to Apulian environment, economy, and culture may be beyond estimation.”