Compact CRISPR systems found in some of world’s smallest microbes 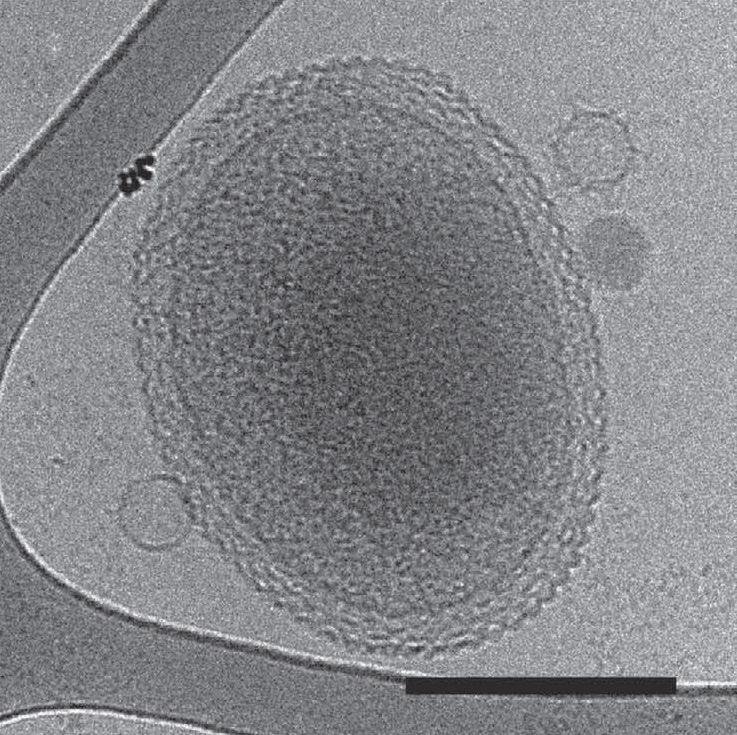 A cryo-electron tomography image of an ultra-small bacteria similar to the ones found to have small, compact CRISPR-Cas systems potentially suitable for laboratory gene-editing. The bacteria is less than 200 nanometers across (bar is 100 nanometers). The three objects near the bacteria are viruses, or phages, that attack bacteria. (Banfield lab image)

UC Berkeley scientists have discovered simple CRISPR systems similar to CRISPR-Cas9 — a gene-editing tool that has revolutionized biology — in previously unexplored bacteria that have eluded efforts to grow them in the laboratory.

The new systems are highly compact, befitting their presence in some of the smallest life forms on the planet. If these systems can be re-engineered like CRISPR-Cas9, their small size could make them easier to insert into cells to edit DNA, expanding the gene-editing toolbox available to researchers and physicians.

“These are particularly interesting because the key protein in these CRISPR systems is approximately the same as Cas9, but is not Cas9. It is part of a minimal system that has obvious potential for gene editing,” said Jill Banfield, a UC Berkeley professor of earth and planetary sciences and of environmental science, policy and management.

“The important thing here is that we found some of these CRISPR systems in a major branch of the bacterial tree, opening the door to a whole new world of microbes that are not cultured in the lab, so we don’t really know what they are and what their habits are,” said co-author Jennifer Doudna, a UC Berkeley professor of molecular and cell biology and of chemistry and a Howard Hughes Medical Institute investigator. Both Doudna and Banfield are faculty scientists at Lawrence Berkeley National Laboratory.

The team also found the first CRISPR-Cas9 system in some of the world’s smallest microbes: a nano-scale member of the archaea, which is a sister group to the bacteria.

The variety of uncultivable bacteria has only recently been recognized, in large part due to Banfield and her lab colleagues, who use metagenomic analysis to explore microbial diversity in exotic environments, from toxic pools in abandoned mines to the soil in Superfund contamination cleanup sites and the guts of premature infants. The majority of all bacterial life on the planet is basically unknown because these organisms cannot be cultivated in lab dishes, probably because they are symbionts and rely upon other microbes for nutrients needed to survive.

One of the new CRISPR proteins, dubbed CasY, was discovered in a massive group of recently recognized bacteria — what Banfield calls candidate phyla radiation (CPR) and which may contain half of all bacterial diversity — that live in geysers and in soil several feet underground. Another new one, CasX, was found in bacteria from known phyla living in groundwater and sediment. The two groups of nanoarchaea found to contain CRISPR-Cas9 were first described by Banfield from acid mine drainage.

Banfield, Doudna and their colleagues reported the findings today in the journal Nature.

Read the full story on the UC Berkeley News website.