Todd Dawson’s field equipment always includes ropes and ascenders, which he and his team use to climb hundreds of feet into the canopies of the world’s largest trees, California’s redwoods.

It’s laborious work, but he’ll soon be getting a little help. From drones.

This promotional video by Parrot describes how the company is working with UC Berkeley ecologist Todd Dawson to learn how drones and multispectral cameras can help monitor the health of giant sequoias.

Dawson, a professor of integrative biology and environmental science, policy and management at UC Berkeley has teamed up with Parrot to test the company’s drone-based research tools as a way to monitor the Sierra Nevada’s giant sequoias more intensively, helping him find out how they utilize water and sunlight and predict how they will deal with a warmer Earth and changes in water supply.

The need is urgent, Dawson said. Since 2010, more than 102 million trees, mostly pines and firs, have died in California because of drought, 62 million in 2016 alone. Why are pines and firs succumbing, but the thousand-year-old sequoias surviving, and will that continue into the future?

In August, he and Gregory Crutsinger, a plant ecologist and head of scientific programs at Parrot, performed the first test of a drone, a quadcopter, equipped with a state-of-the-art multispectral camera that takes photos in red, green and two infrared bands. Called the Sequoia, the camera works like more expensive satellite and airborne sensors, measuring the sunlight reflected by vegetation in order to assess physiological activity or plant health.

“Before, a team of five to seven people would climb and spend a week or more in one tree mapping it all around,” Dawson said. “With a drone, we could do that with a two-minute flight. We can map the leaf area by circling the tree, then do some camera work inside the canopy, and we have the whole tree in a day.” 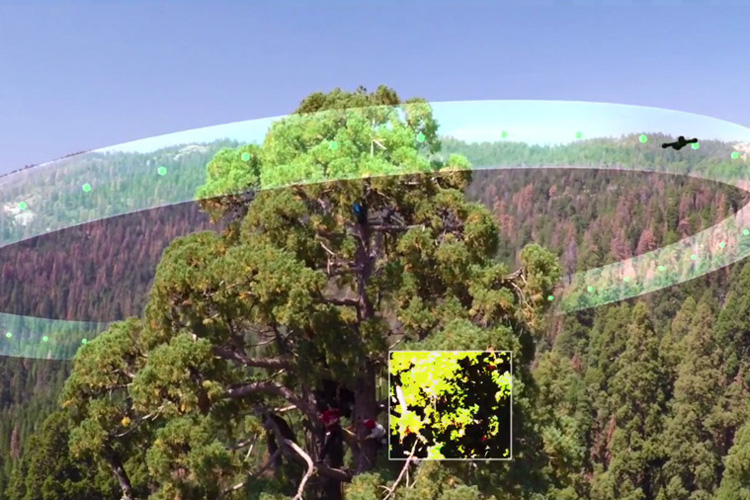 A camera-equipped drone can scan the same tree multiple times a day to produce digital maps of the leaves and branches (inset) as they change their respiration and photosynthesis throughout the day.

After the data and photos were stitched together by a software program called Pix4D, Dawson and Crutsinger ended up with a three-dimensional representation of the foliage that his team had never seen before – information that will be used to determine how much carbon the tree takes up each day and how much water it uses, the basis for assessing what might happen with higher carbon dioxide levels in the atmosphere and less water on and in the ground.

“With repeat flights you can watch a forest grow without ever actually measuring any trees in the forest,” Dawson said. “I think drone technology holds a lot of promise to do some very innovative science over time and in three-dimensional space with a relatively cheap tool. It is really pretty amazing.”

Monitoring the health of the state’s iconic sequoias is just one instance of how drones, combined with state-of-the-art sensors, can benefit science, Crutsinger said. 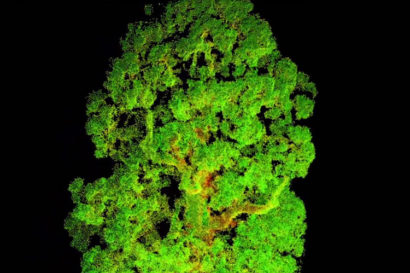 A digital scan of the crown of a giant sequoia.

“Drone technology is getting much cheaper, but stitching and photogrammetry are innovating at the same time,” he said, referring to the science of making measurements from photos. “That is the backbone of the whole new commercial drone industry: not just the ability to capture the data, but also to process very high-resolution photos into millions of points that generate a three-dimensional model. This is going to help science but also environmental monitoring, agriculture and even construction sites.”

Crutsinger, a former Miller postdoctoral fellow at UC Berkeley, is asking other scientists to propose research collaborations with Parrot in exchange for free drones, cameras and analysis software. These Climate Innovation Grants are open to any student or researcher around the world.

Dawson is now assessing how best to use the initial data and the drone and camera to answer questions in plant ecology. For the giant sequoias (Sequoiadendron giganteum), which he studies in the University of California’s 320-acre Whitaker Forest just outside Sequoia-Kings Canyon National Park, he anticipates learning a lot more about their physiology than can be achieved by roping onto the canopy. Knowing the leaf area alone is a key advance, since he and his team have been able to model only the trees’ branches and twigs, from which they estimate leaf surface.

Read More at the Source

Multimedia, In the News