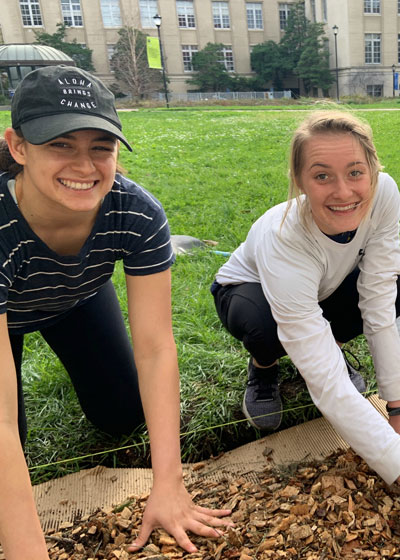 Undergraduate students Mackenzie Feldman and Bridget Gustafson have been featured on Make It Better’s list of 17 Bay Area Environmentalists Making a Difference in 2019.

Feldman and Gustafson were recognized for their work on the Herbicide-Free Cal, a campaign that the pair launched in 2017. Feldman, who is from Hawaii, a state with a long history of herbicide and pesticide abuse, and Gustafson, who lost her twin brother to cancer in 2013, began by working to ban glyphosate, a known carcinogen from the area around the Cal beach volleyball courts.

Feldman and Gustafson then  created a campus-wide campaign to eliminate the use of all toxic herbicides from the grounds. Herbicide-Free UC has now expanded across the UC system and Feldman and Gustafson have teams of student activists working to prevent the use of toxins at UC Davis, UCLA, and UC Riverside. As leaders the duo understands that pesticides and herbicides disproportionately affect some of our country’s most vulnerable populations: youth and farm workers. Their ultimate goal is to bring the conversation about the dangers of pesticides and herbicides to the national level, across all campuses and institutions.

UPDATE: In May 2019, Feldman and Gustafson's Herbicide-Free Cal efforts were rewarded when the University of California issued a temporary ban on the use of glyphosate-based herbicides at all UC locations. In a public letter, UC President Janet Napolitano noted that the ban has been instated "due to concerns about possible human health and ecological hazards."