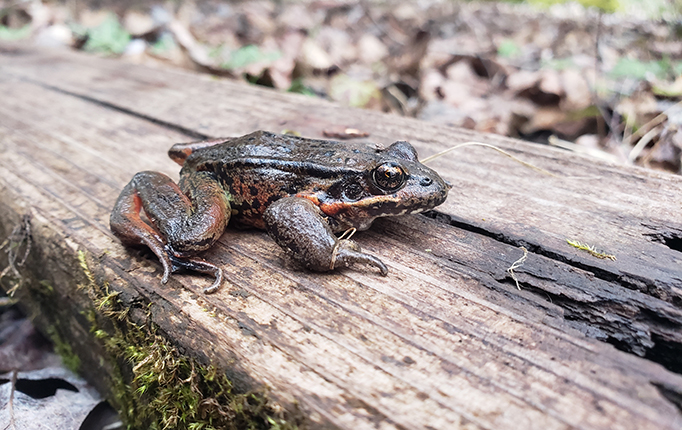 An urban red-legged frog found during the breeding season at a stormwater pond in Oregon. Photo by Max Lambert.

Humans share urban areas with a wide variety of species, from the regal cardinal to the unwelcome cockroach. Such species have long thrived in the dynamic and novel environments provided by cities.

In a paper published in the journal Nature Ecology & Evolution  today, two researchers emphasize the need to apply evolutionary principles to urban biodiversity conservation.  Max Lambert, a Smith Conservation fellow in the Department of Environmental Science, Policy, and Management, and Colin Donihue, a postdoctoral fellow in biology at Washington University in St. Louis, outline guidelines for integrating evolutionary ideas into the conservation and management of urban ecosystems.

“We now know that evolution happens much faster than Darwin originally imagined,” says Lambert. “That means that some species are rapidly evolving within and because of cities. Knowing how cities reshape a species’ evolution is critical for figuring out how to conserve and manage the animals, plants, and fungi around us.”

Urban areas host a high diversity of organisms, ranging from those considered intrinsically metropolitan, such as pigeons, to those that have grown rare in the wild. Lambert and Donihue call for classification—for example, whether an organism is native or non-native, or whether it is a management priority or not—in order to make sound conservation decisions and formulate management goals.

Lambert studies the Northern Red-legged frog, or Rana aurora,  a species of conservation concern that is declining across the Pacific Northwest. While relatively uncommon in cities, red-legged frogs are found in municipal water retention ponds. “While these ponds concentrate a number of pollutants, they can also be great habitat for wildlife,” says Lambert. With colleagues in the Oregon cities of Portland and Gresham, he’s working to bolster and promote populations of red-legged frogs in urban ponds.

At a time when researchers seek to understand urban ecology and conservation, many cities are adopting “green” measures like the addition of trees and parks. Beyond the human benefits, urban green places are sometimes promoted as “wildlife corridors.” Such corridors can connect populations of animals and plants to nearby rural habitats, as well as habitats within and among cities.

But Donihue notes that the picture is not always so simple. “If we don’t think critically about species’ evolutionary backgrounds in cities, it’s possible to thwart your own conservation efforts by accidentally diluting the urban gene pool with rural genes that are not adapted to urban environments,” he says. “This leaves isolated city populations worse off than before.”

Ecosystems in urban areas contain a haphazard assortment of native species—or those that have survived development-driven habitat loss—and species that moved in later. Red-crowned Amazon parrots, for example, are highly endangered in Mexico, but populations of these parrots have settled in cities like Los Angeles and San Diego. Many even seem to fare better in the urban environments than native ranges, where habitat loss, poaching, and the legal pet trade have seriously depleted populations.

Lambert and Donihue also discuss adding species back into cities selectively, to enhance urban biodiversity and aid in conservation. “The idea of urban rewilding and purposefully introducing foreign species into our cities may not be palatable to most conservation biologists,” says Lambert. “But why can’t we consider adding back into our cities native species that haven’t yet figured out how to cross the urban threshold on their own?”

He adds that species will fill urban niches eventually, so managers could choose and promote certain species over others—including those that were displaced by building the city in the first place.