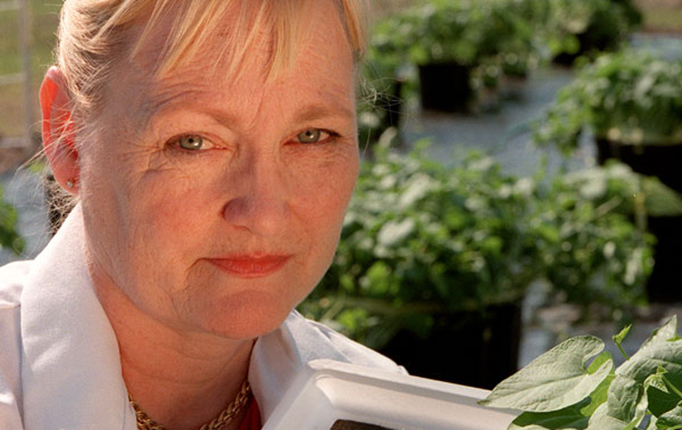 Photo via the Department of Entomology & Nematology at the University of Florida.

Dr. Marjorie Hoy, a former professor in the College and pioneer in insect molecular genetics, passed away unexpectedly on Friday June 19, 2020,  in Colorado.

Dr. Hoy was an exceptionally talented and rare individual who spent considerable time at the College.  She received her Master's ('66) and PhD ('72) in the former Department of Entomology.  The time for completion of her PhD was phenomenal, at a record of 1.5 years.  After leaving briefly for a postdoctoral position in Connecticut, she returned to the College as an assistant professor in the Department of Entomology in 1976.  She achieved the rank of full professor six years later.  In 1992, she accepted the Davies, Fischer and Eckes Endowed Chair in Biological Control at the University of Florida.  After her retirement, she was Professor Emerita of Biological Control at the University of Florida.

Dr. Hoy was a pioneer in insect molecular genetics, in particular as it applied to biological control and agricultural acarology.  Her book, Insect Molecular Genetics,  is widely considered a classic.  Her publication list is lengthy, including at least 159 peer-reviewed articles and 53 book chapters and books.  Her work is frequently cited—by some estimates, 12,000 times.  She was an advisor and mentor to 12 Master's and 15 PhD students, as well as 20 postdocs, many of whom have gone on to successful academic careers.  During her long and productive career, Dr. Hoy received many special recognitions and awards. To name several, she became the first female faculty member of the UC Berkeley Department of Entomology in 1976, was awarded the Entomological Society of America Founders Memorial Award in 1992, and was awarded a Fellowship of the American Association for the Advancement of Science (AAAS) in 1990.  She was a knowledgeable and dynamic instructor, as well as an advocate for increasing diversity among students and academic hires in Entomology.

A recent interview and article featuring Dr. Hoy’s illustrious career can be found in the journal American Entomologist ,  on the Entomological Society of America  website. An In memorium post may also be found on the UC Berkeley Academic Senate site.