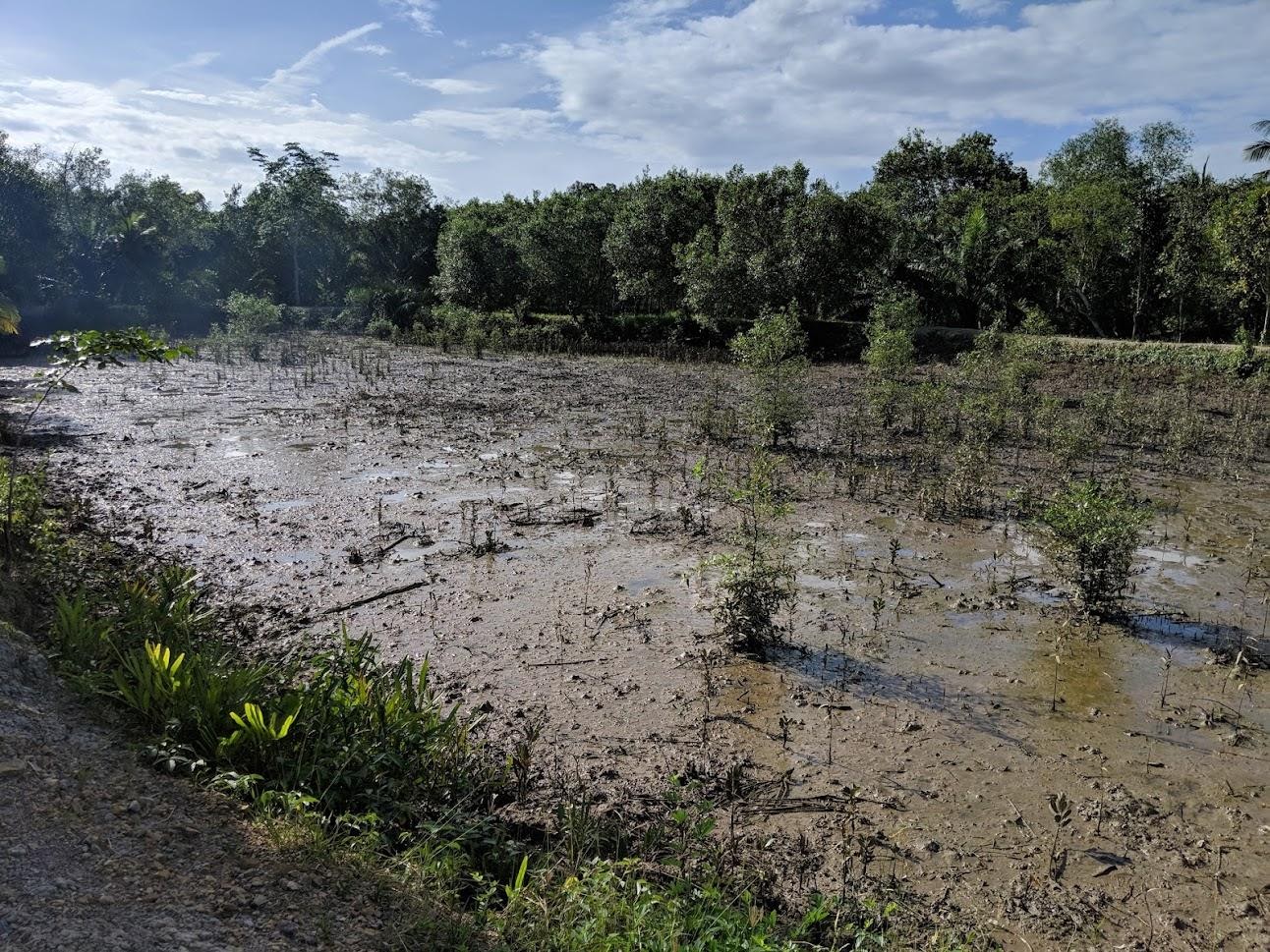 Natural regeneration of mangroves in an aquaculture pond that is no longer in use. The ecosystem functions and services of regenerating mangroves differ greatly from those of mature mangroves, which can be seen in the background of the image. Photo credit: Jacob Bukoski.

A commonly used environmental policy is hiding large emissions of greenhouse gases, according to new research by UC Berkeley scientists recently published in the journal Ecography.

“No net loss” policies are meant to ensure that if a development project (e.g., highway construction) destroys an ecosystem, an equivalent area of the same ecosystem is created elsewhere. But treating all areas as equal ignores important climate impacts: the greenhouse gas emissions from the destruction of old ecosystems can be much greater than the carbon that accumulates in the new ecosystems. For wetlands, the emissions can be four times the amount of carbon that is sequestered in new ecosystems.

New research shows this for the case of mangroves in Thailand. Mangroves, a type of forested coastal wetland found in the tropics, are important ecosystems for fighting climate change, supporting coastal communities, and housing biodiversity. Given their value, there is widespread interest in restoring and reforesting areas that were formerly mangroves. However, mangroves today remain threatened from deforestation. There is both gain and loss of mangroves, with some of the newly created mangroves offsetting losses of older forests.

“For net loss statistics to effectively describe change in our environment beyond just extent—for example the health of an ecosystem—each acre of new wetland would need to be equivalent to the acres of older wetland lost,” explained lead author Jacob Bukoski, who earned his PhD in the Department of Environmental Science, Policy, and Management (ESPM) this spring. “However, the qualities of an ecosystem that we often value tend to develop and increase slowly over time.” In other words, newly created wetlands are unable to provide the same benefits as older undisturbed wetlands, even if an equivalent amount is recreated.

The findings have implications beyond mangroves, too. For example, Bukoski said, there is reason to believe that the negative climate impacts from replacing old wetlands with new ones may be greater in other wetland types. Wetlands come in many different forms, but generally are broken down into coastal and freshwater systems. This distinction has important implications for fluxes of greenhouse gases in young versus old ecosystems.

Methane—a type of greenhouse gas that is less common but more potent than carbon dioxide—is produced in freshwater wetlands by methanogens, a specific type of microorganism. However, production of methane by methanogens is limited in coastal wetland systems due to sulfates in marine water. Moreover, the climate impact of methane production in wetlands is greatest in young freshwater wetlands. Older freshwater wetlands can accumulate enough carbon to counteract the effect of methane production, eventually becoming a benefit for the climate. In these freshwater systems, the consequences of replacing older wetlands with new wetlands may be much greater than in mangroves. The study authors note that more research is critically needed to understand these important dynamics.

“As we move into the United Nations’ Decade of Ecosystem Restoration, there are immense pushes to restore ecosystems across the globe,” said Bukoski, who is now a postdoctoral associate at Conservation International. “These efforts are admirable and needed; however, we must also focus efforts on protecting existing ecosystems. At the end of the day, we need the ways in which we monitor changes in our environment to align with the qualities of ecosystems that we value.”

Additional authors of this study are Matthew D. Potts, a professor in ESPM, and Iryna Dronova, an associate professor in both ESPM and the Department of Landscape Architecture and Environmental Planning.