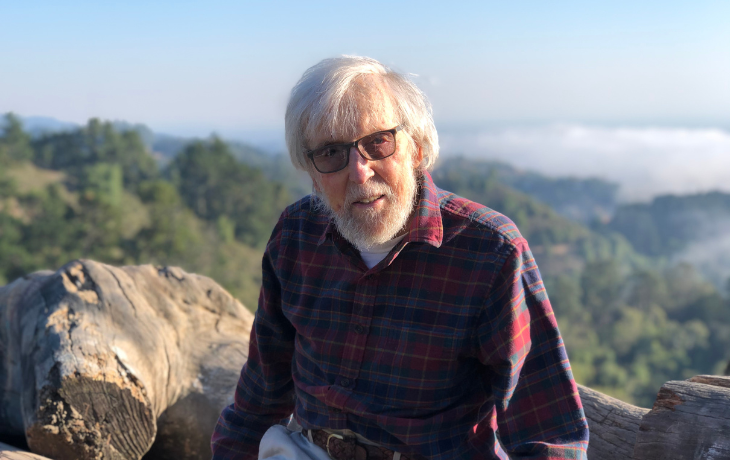 Lawrence “Larry” J. Waldron, a valued colleague, scholar, and mentor, died on July 7, 2022. Larry was born on April 17, 1925, in Prescott, Arizona, beginning a long and wide-ranging pathway through life and academia. After graduating from Burlingame High School in 1943, Larry volunteered for service in the U.S. Navy and became a commissioned officer in less than three years, serving as a Naval Aviator during WWII. Upon the conclusion of his enlistment in 1947, he enrolled at UC Berkeley and obtained an AB with Honors in Slavic Languages in 1950. During this interval he discovered a deep affinity for science. However, this new aspiration was interrupted by the outbreak of the Korean War, which brought him back into active service from 1951 to 1953, during which time he served as a naval aviator and instructor.

Following his release from the Navy, Larry returned to Berkeley to pursue a thorough science education. Financing his education with a variety of part-time jobs (including  Laboratory assistant, charter pilot, andand Fuller Brush salesman), he graduated 4 years later, in 1957, with a BS with Highest Honors in Soil Science. In 1958, Larry took a position as a laboratory assistant at the University of California at Davis, simultaneously pursuing his PhD in the area of soil physics. As a result of a vacancy in the area of soil physics in the Department of Soils and Plant Nutrition at Berkeley, Waldron was hired as an assistant professor in 1962.

Larry was known for his gentle demeanor and wide-ranging interests in science and society throughout his career. His research was equally broad ranging, a focus on the physics of soils with extensive knowledge in engineering and plant physiology. In this latter area, Larry collaborated for a number of years with our late colleague Norman Terry, a plant physiologist, on root zone water stress and salinity interactions. He had a special interest in soil mechanics, particularly the effect of plant roots on soil strength, which continued to the end of his career. When it was recognized that selenium buildup had led to waterfowl deformities in the San Joaquin Valley in the late 1980’s, Larry led a department-wide proposal to the Kearney Foundation of Soil Science that provided funding for a number of faculty and students to contribute to the science and remediation of this important issue to the State. He retired from UC Berkeley in 1991.

Larry contributed advice to several of us that influenced our career paths, and ultimately to our own positions at Berkeley. As a teacher, Larry provided deep insights into physical processes occurring in soils and the environment, and his soil physics courses were remembered by many students as outstanding learning experiences. This was in part because his lectures and labs opened up opportunities to go beyond exercises in measuring specific properties and processes, to understanding physical phenomena in a broader context. Standard treatments of the Darcy-Buckingham law often bring in Poiseuille’s law, but Larry emphasized its derivation and approximate applicability in diverse phenomena such as atherosclerosis and water flow in the plant xylem. Even simple measurements were used to teach the physical principles connecting output from sensors to the natural processes they quantify.

One of Larry’s former students, Tetsu Tokunaga, said “I assumed that such education was available in most soil physics and hydrology programs, but over the decades I’ve come to appreciate how rare and valuable Larry’s teaching was. A memorable early indication of Larry’s insights came to me in 1981 as a graduate student research assistant in the Earth Sciences Division of Lawrence Berkeley Laboratory (now Lawrence Berkeley National Laboratory), where we were beginning work on the hydrologic aspects of inactive uranium mill tailings piles in Wyoming and Colorado.”

“Being located in environments where annual evapotranspiration substantially exceeds precipitation, most of the engineers working on these sites assumed leaching of tailings contaminants would stop after cessation of disposal operations,” Tokunaga continued. “Larry was the only one I talked with back then who reasoned otherwise. Applying just a small part of what he taught in his undergraduate soil physics course to instrument several sites yielded measurements demonstrating that contaminants were indeed continuing to drain into underlying aquifers. Despite excavation and disposal of the original tailings, recharge through contaminated sediments at some sites remains a problem today.”

Waldron married Elizabeth Mueller in April of 1960, and they resided in north Berkeley for many decades. They had two children, Rachel and Emily. Waldron played both the violin and the viola. He loved cats and would care for strays in the community. An active windsurfer near the Berkeley Marina, Larry remained a part of the Bay Area’s windsurfing community well into his retirement years. He had a large collection of boards and sails to address the wide array of weather conditions on the Bay, and integrated fluid mechanics with his joy of recreation. Upon giving up this sport about a decade ago, he donated his extensive collection to the Cal Sailing Club. Larry was also very active with the UC Retirement Center, organizing lecture series and assisting in other Center activities.

One of the longest-standing areas of scholarly research on the Berkeley campus is the study of soil. Larry’s guidance as graduate and undergraduate advisor—and as department chair during especially critical periods of administrative turmoil—contributed to the continuance of what is, in the 21st century, a critical resource attracting a multidisciplinary and growing segment of science concerned with global climate change and food production. For those of us who knew Larry, it is easy to imagine how this lively and societally important landscape would appeal to his innate curiosity, and his roaming mind. We express our gratitude for his service, and we mourn his passing