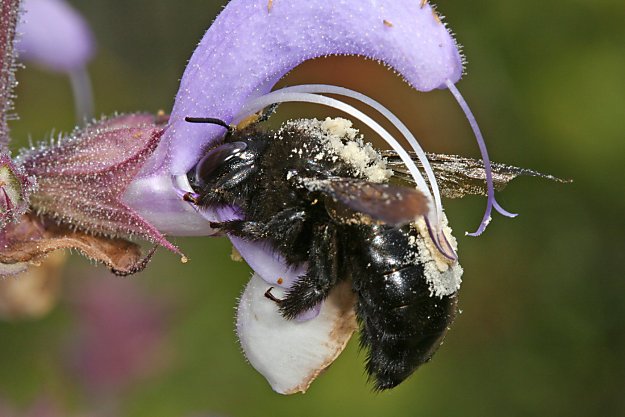 The great corollas dilate, peeling back their silks.”

Sylvia Plath's poem "The Beekeeper's Daughter" is about as cheerful as most of what she wrote concerning her (or her narrator's) father - which is to say: not at all - but its setting, a garden peopled with bees, is dizzyingly lush. Landscape artist Shirley Watts' "Mouthings" installation in the UC Berkeley Botanical Garden, a happy confluence of art and science, takes the poem as a step into context, the human emotion evoked by the natural world and woven within it, part of a barely seen whole.

Watts pays homage to the natural shapes of honeycombs, and UC Berkeley entomologist Gordon Frankie and insect photographer Rollin Coville contributed signage about the unsung ecosystem services of native bees. The result is both visually stunning and thought-provoking.

The structure was originally created for the "Late Show" exhibition at Sonoma County's Crossroads garden in 2009. Watts says her inspiration was a photograph of a wild beehive, with the comb draped and folded like flowstone in a cave. "The shape of the thing is just amazing," she said. "Honeybee hives are amazing architecture."

She caught that look in the curves of the installation's canopy. Instead of beeswax, Watts used Nomex sandwiched between layers of bronzed window screen. The whole structure shimmers in the autumn sun. Hexagonal cast-concrete seats echo the shape of individual cells; resin poured onto them drips like honey. The text of the Plath poem is etched onto a gilded tabletop.

"There's something so engaging about bees," Watts said. "It's hard to love flies, but bees - you can find them sleeping in flowers in the morning. There's a photo of a dahlia with a whole gang of male bees in it. It's like a bee dorm." Her ideas dovetailed with Frankie's campaign to publicize the role of native bees in California's botanical gardens.

"We've been surveying gardens throughout the state to find out what kinds of native bees are in each garden," said Frankie, a longtime advocate of urban bees who supervises a bee-friendly garden at UC's Oxford Tract in downtown Berkeley. "We saw very little mention in any of them of plants' evolutionary history and relation to pollinators." So far, in addition to the UC garden, he's approached gardens in Redding, Santa Cruz, Santa Barbara and Palm Desert, offering to tailor signage for each.

Most of us know only honeybees and bumblebees; Frankie says there are 1,600 native bee species in California alone, the highest number of any state. They're one reason for our diversity of flowering plant species, at least 5,000.

Bees have co-evolved intimate links with native plants: "Although 90 to 95 percent of all plant material in the state is nonnative, native bees prefer native plants. Eighty percent of native plant species attract bees at measurable levels, versus 8 percent of nonnatives. Native bees don't like plants from South Africa and Australia and have little interest in South American plants." Some native bees pollinate crop plants, although agriculture relies mostly on honeybees: "You can't put a native bee in a box."

Frankie, who's collaborating with Coville on a book on urban bees, says the photographer has set a new standard for bee imagery. For the garden exhibit, Coville provided a portrait gallery of natives: longhorns, wool-carders, burly black carpenter bees, metallic-green sweat bees.

"Shirley is a natural fit for this garden, with her plant and natural orientations," said Associate Director Chris Carmichael. "It was her vision, and we knew it was right. We're thrilled to carry this out."

Watts is looking forward to more collaboration with the Botanical Garden. Her plans for next year include an exhibit, "Natural Discourses: Artists, Scientists and Poets in the Garden," featuring the poetry of Hazel White and others, the photography of Deborah O'Grady and the hand-knit fog catchers of Nami Yamamoto.

"Mouthings" will be up for the next six months. It's in the garden's Mediterranean section, surrounded by the shrubby thistles of the Canary Islands and the giant geraniums of Madeira - plants that, in September, swarmed with hardworking bees.

Joe Eaton and Ron Sullivan are naturalists and writers in Berkeley. E-mail comments to home@sfchronicle.com.