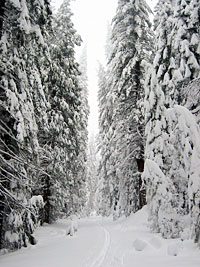 Runoff from the Sierra Nevada, a critical source of California’s water supply, could be enhanced by thinning forests to historical conditions, according to a report from a team of scientists with the University of California, Merced, UC Berkeley and Environmental Defense.

The team proposes to test the hypothesis that forest-management strategies that use thinning to reduce fire risk and maintain the historical mix can also increase water yield and extend the snowpack in the Sierra Nevada.

Scientists believe thinning forests could enhance water runoff from the Sierra Nevada. They suggest that by selectively reducing the number of trees — which use large amounts of the water received through precipitation — the amount of water that is released from the forest as runoff could increase. This enhanced runoff could make things easier for farmers and water managers statewide.

As part of the Sierra Nevada Watershed Ecosystem Enhancement Project (SWEEP), the scientists plan to reduce forest density in test areas and examine the impacts on water runoff, forest health and other ecosystem services, and provide a template for broader forest management in the Sierra Nevada.

The thinning of forests, which are much denser now than in past centuries, is already a common practice to reduce the risk of wildfires. The scientists also believe thinning can be done in ways that enhance the forests’ overall ecological health.

“It is critical to test these thinning prescriptions in well-controlled, well-monitored experimental areas to evaluate and verify the effects before applying them statewide,” said lead author Roger Bales, a UC Merced professor and director of the Sierra Nevada Research Institute. “Reductions in forest density to enhance runoff have been attempted in past experiments, but never over a sustained period of time, and never under the conditions that currently exist in the Sierra Nevada.”

California’s water supply has been diminished by drought in recent years, and climate change is only exacerbating the problem, the researchers said. Warmer temperatures mean more rain and less snow, which leads to runoff that comes earlier in the year. Warming can also lengthen the growing season for trees and other plants, reducing runoff, and the warmer, drier conditions have been shown to increase the frequency and severity of wildfires.

Reducing forest density can help counter the effects of climate warming on runoff, they said, in addition to enhancing the runoff directly.

“Climate change is having and will have direct effects on the water supply and storage capacity of the Sierra Nevada forests,” said UC Berkeley Professor John Battles, one of the researchers on the project. “Management with an eye toward the water balance provides one potentially important mitigation tool.”

Other researchers on the project include Yihsu Chen, Martha H. Conklin and Philip Saksa of UC Merced; Kevin L. O’Hara and William Stewart of UC Berkeley; and Eric Holst of Environmental Defense.