BERKELEY — A new study by biologists at Stanford University and UC Berkeley highlights the dramatic hit on the evolutionary diversity of wildlife when forests are transformed into agricultural lands. 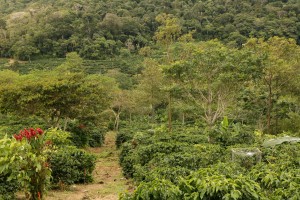 Diversified farms, such as this landscape shot of a coffee plantation in Costa Rica, house substantial phylogenetic diversity. (Photo by Daniel Karp)

The researchers found a middle ground in diversified agriculture, or farmlands with multiple crops adjoined by small patches of forest. Such landscapes supported on average 600 million more years of evolutionary history than the single crop farms. “The loss of habitat to agriculture is the primary driver of diversity loss globally, but we hadn’t known until now how agriculture affected diversity in an evolutionary context,” said study co-lead author Daniel Karp, UC Berkeley postdoctoral research fellow in environmental science, policy and management. “We found that forests outperform agriculture when it comes to supporting a larger range of species that are more distantly related, so by maintaining patches of tropical trees and multiple crops on their land, farmers can enhance evolutionarily distinct species.” Karp began work on this project while he was a Ph.D. student at Stanford University’s Department of Biology. He continued the research as a NatureNet fellow funded through the Nature Conservancy in the lab of Claire Kremen, UC Berkeley professor of environmental science, policy and management and one of the study’s senior authors. “While we knew that a diverse range of crops supports more species than monoculture agriculture, we had no idea until this study that these species comprise much more of Earth’s evolutionary history than those found in monocultures,” said Kremen, who is also faculty co-director of the UC Berkeley Food Institute. “It shows how important it is for biodiversity conservation to surround protected areas with productive forms of diversified agriculture, whenever possible.” 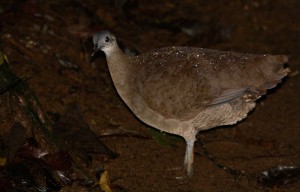 The great tinamou is an evolutionarily distinct bird that declines in farmland but thrives in tropical rainforest. (Photo by Daniel Karp)

The authors trace the decline of phylogenetic diversity in farmland to the fact that evolutionarily distinct species tend to require niche habitats for survival, and these are often wiped out in developed lands. “This work is urgent, because humanity is driving about half of all known life to extinction, mostly through agricultural activities to support our vast numbers and meat-rich diets,” said Gretchen Daily, the Bing Professor in Environmental Science at Stanford and a senior author on the paper. “How are we restructuring the tree of life? What are the implications for people? And what can we do to harmonize farming with nature?”

Read the study in Science.