BERKELEY — A new study by researchers at the University of California, Berkeley, finds that consuming bushmeat had a positive effect on children’s nutrition, raising complex questions about the trade-offs between human health and environmental conservation. 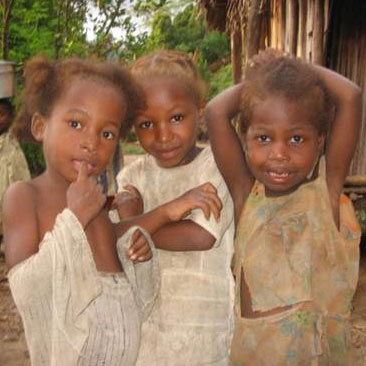 They further estimated that a loss of access to wildlife as a source of food – either through stricter enforcement of conservation laws or depletion of resources – would lead to a 29 percent jump in the number of children suffering from anemia. Among children in the poorest households, the researchers added, there would be a three-fold increase in the incidence of anemia. Left untreated, anemia in children can impair growth and cognitive development.

The findings are to be published the week of Nov. 21 in the journal Proceedings of the National Academy of Sciences.

“When thinking of creating protected areas for diversity, policymakers need to take into consideration how that will impact local people, both in livelihoods and from a health perspective,” said study lead author Christopher Golden, who did the research while a graduate student in UC Berkeley’s Department of Environmental Science, Policy and Management and at the School of Public Health. “We need to find ways to benefit the local population in our conservation policies, not hurt them.”

Hundreds of millions of people worldwide consume bushmeat a key source of bio-available iron, particularly for those living in rural communities. But when the menu includes endangered species, the researchers said, human nutritional needs must contend with efforts to manage wildlife resources.

Because bio-available iron is primarily sourced from meat, the researchers hypothesized that increased consumption of wildlife would result in a reduced incidence of clinical anemia. They tested their theory by monitoring the diet and hemoglobin levels of 77 children every month for a year.

The children, all under 12 years old, lived in the Makira Protected Area of Madagascar, one of the most critical biodiversity hotspots in the world.  The Makira region is located in a remote part of eastern Madagascar, and its inhabitants rely heavily upon local wildlife – such as lemurs and bats – for food. 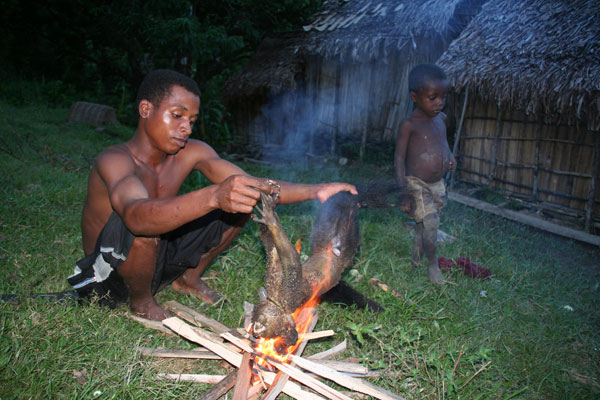 Children there who ate more bushmeat had higher levels of hemoglobin, an iron-containing protein in red blood cells, even after factoring in such variables as consumption of domesticated meat, household income, sex, age and nutritional and disease status, the researchers found.

Eating domesticated meat is prohibitively expensive for many households, while wildlife is free, the authors noted. They found that, among impoverished people, bushmeat accounted for up to 20 percent of overall meat consumption. While many of the wildlife species are illegal to hunt, enforcement in the protected areas can often be lax.

“It is clearly not environmentally sustainable for children to eat endangered animals, but in the context of remote, rural Madagascar, households don’t always have a choice,” said Lia Fernald, UC Berkeley associate professor in the School of Public Health, who worked with Golden to design the study. “In places where a diverse range of nutritious food is unavailable, children rely upon animal-source foods – milk, eggs and meat – for critical nutrients like fats, protein, zinc and iron. What we need for these children are interventions that can provide high-quality food sources that are not endangered.”

The authors of the study, which received its primary support from the National Geographic Society Conservation Trust and the National Science Foundation (NSF), emphasized the need for site-specific and culturally relevant solutions.

“In our study area, domesticated meat is actually desirable, but unaffordable, so one possible solution is to support programs that allow the people there to raise chickens or goats,” said Golden, now a post-doctoral fellow at the Harvard Center for the environment and a visiting scientist at Harvard’s School of Public Health. “But in places like Africa’s Gabon or Equatorial Guinea, bushmeat is a desirable luxury item, so simply offering people there domesticated chicken meat as an alternative may not be successful. The sustainability of any type of conservation project relies upon local buy-in.” 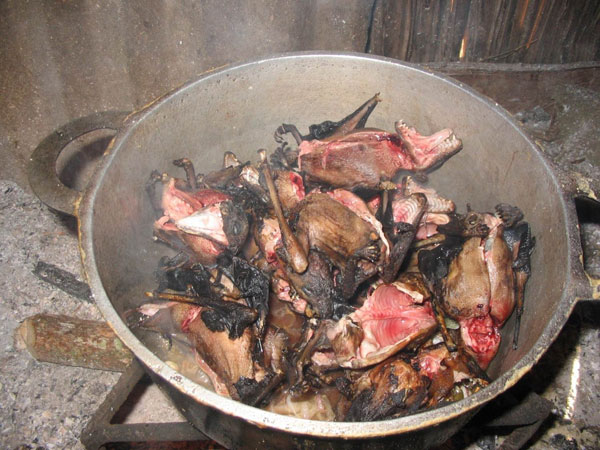 In addition to Fernald, Golden was advised at UC Berkeley by associate professors Claire Kremen and Justin Brashares in the Department of Environmental Science, Policy and Management. All are co-authors of the study.

The intersection of human health, household income and wildlife populations has become an increasingly important focus of research at UC Berkeley, they said. For instance, the NSF recently awarded a five-year grant for a project led by Brashares to understand the links between human health, household wealth and natural resource use. Kremen, Fernald, Golden and other colleagues are also part of this project, which will take place at nine rural sites in Ghana, Kenya and Madagascar.

B.J. Rodolph Rasolofoniaina, a seven-year member of Golden’s research team and a research associate at the Wildlife Conservation Society in Madagascar, was another co-author of the study.

Have you voted to name the three peregrine falcon chicks? Graduate student Sean Peterson has chosen the finalists f… https://t.co/I3pJqc12fE