A new study quantifying the amount of carbon stored and released through California forests and wildlands finds that wildfires and deforestation are contributing more than expected to the state’s greenhouse gas emissions. The findings, published online Wednesday in the journal Forest Ecology and Management, came from a collaborative project led by the National Park Service and UC Berkeley. The results could have implications for California’s efforts to meet goals mandated by the state Global Warming Solutions Act, or AB 32, to reduce greenhouse gas emissions to 1990 levels by the year 2020. The bill, which passed in 2006, assumed no net emissions for wildland ecosystems by 2020. 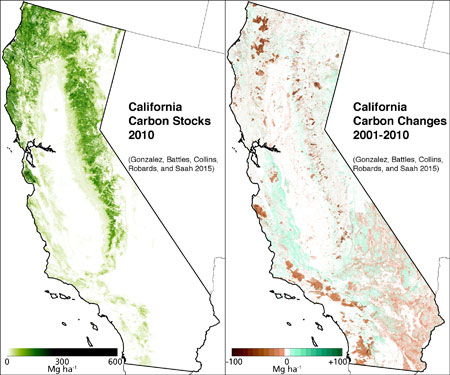 The researchers noted that the information available at the time the bill was passed may have underestimated the release of carbon through landmass conversions and wildfires, which are projected to increase in intensity in the western United States due to climate change. The authors pointed out that California is one of the few jurisdictions in the world to set mandatory greenhouse gas emissions targets.

“Determining the balance between carbon storage and emissions is essential for tracking the role of ecosystems in climate change. Growing vegetation naturally removes carbon from the atmosphere, reducing the magnitude of climate change,” said study lead author Patrick Gonzalez, the National Park Service climate change scientist. “Conversely, burned or dead vegetation releases carbon into the atmosphere, exacerbating climate change.” Gonzalez worked with forest ecologist John Battles, a professor in UC Berkeley’s Department of Environmental Science, Policy and Management and the principal investigator on the project to quantify carbon storage and emissions in the state’s wildlands.