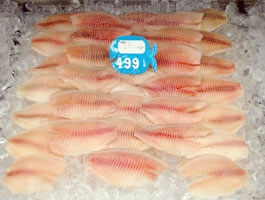 If you buy fresh fish with any regularity you’ve likely come across tilapia as an offering. A relative newcomer to American fish markets, the mild, flakey white fish originated in Africa and was introduced to American markets about 10 years ago, sometimes accompanied by favorable sustainability ratings from markets like Whole Foods. Most farmed tilapia consumed in the U.S. currently comes from fish farms in Central America.

“It's a fast-growing fish species that seems more sustainable because it is usually a plant-eater. That is, the fish can survive on plants rather than other fish,” says Alastair Iles, a UC Berkeley assistant professor of environmental science, policy, and management, whose policy research includes studying aquaculture and in particular farmed tilapia.

But sustainability turns out to be a relative term. “Producing tilapia brings into play a wide range of issues — how developing countries are trying to create sustainable tilapia farming systems but are also struggling with the pollution and waste that they produce,” Iles says.

The scale of the aquaculture industry is expanding around the world, generating, Iles says, a number of environmental and social impacts that cause increasing concern. In addition to the waste problem that fish farms create, feed made from other fish can deplete fisheries even more, and making soy feed may involve land-based agriculture, which could lead to deforestation in countries like Brazil. Escapes of farmed fishes into the wild harm the genetic diversity of the wild tilapia, and there are land use effects as well.  As a result, multiple certification schemes are emerging to try to define "sustainable" aquaculture at the global scale.

“It's essential to look at how these schemes are developing because they may affect what the whole industry looks like in the future,” he says.

Iles and his collaborator Elizabeth Havice, an ESPM Ph.D. graduate who is now an assistant professor at the University of North Carolina, are examining two certification schemes that are currently developing: the Global Aquaculture Alliance, the aquaculture industry trade group; and the World Wildlife Fund, working in partnership with the newly formed Aquaculture Stewardship Council.

A new study by the Sustainable Fisheries Partnership, a non-governmental organization, compares the two schemes, and concludes that the WWF certification is tougher in its requirements than the GAA’s standard in that farmers tend to fail the WWF requirements more often. But there is little insight into why and how these differences occur. Is it because the two organizations are using science in different ways — for example, depending on a relatively narrow fish farm-centered impacts analysis, versus using a life-cycle approach that looks at where all the inputs comes from? Or is it because the negotiators of the schemes are aiming at technology-based standards that only large-scale farms can meet?

Iles and Havice focused on the WWF and GGA schemes as most important, examining how they have been developing their standards, which have different requirements. Like the Sustainable Fisheries Partnership study, the researchers are finding that the WWF standard is more likely to be sustainable than the GAA one.

“We think the World Wildlife Fund has paid much more attention to a participatory process and has heard from many more stakeholders, whereas the GAA has been quite top-down,” Iles says. They plan to publish their findings next year.

For now, what’s an environmentally sensitive consumer to do? Avoid farmed fish like tilapia? Iles says that’s not the answer. “We need aquaculture for the foreseeable future because wild-caught fisheries just can't supply enough fish,” he says.

But he stresses that there are very different ways to practice this aquaculture. The new standards, together with Iles’ research to clarify the science behind them, should help navigate the murky waters.

“Our aim is to help improve the science-based process for developing these standards so that aquaculture can evolve into the most genuinely sustainable forms and will actually change how farmers across the world practice their work,” he says.

In the meantime, Iles recommends that if you are buying farmed fish, ask for certification to help ensure that the fish is more sustainable. The new certifications are just beginning to show up in stores, so, watch for them, and demand from your store that they be used.