Professor of the Graduate School

The principal theme of my research has been to discover and correlate biological features with traditional morphological evidence in the development of biosystematic relationships of microlepidoptera (small moths). My approach can be categorized along four lines: 1) systematics studies of particular taxa; 2) comparative biology oriented along hostplant or ecological roles (e.g., yucca moths, fungus feeders, borers of woody composites, leaf miners, sand dune associates); 3) a broad spectrum larval rearing program; and 4) faunal inventory.

The major taxa in which I have concentrated efforts are New World Tortricinae (Tortricoidea) and Ethmiinae (Gelechioidea). I have carried out biosystematic studies of these and a variety of other moths, sometimes in response to requests from other biologists (e.g. in cooperation with forest entomologists) or as taxonomic problems became evident during biological and faunal studies.

Our rearing program is the most extensive in the history of the study of New World Microlepidoptera. During the past 40 years my students and I have processed more than 14,000 collections of larval or live adult Lepidoptera. Resulting data encompass more than 1,000 species of moths, through rearing either field-collected larvae or those emerging from eggs deposited by females in confinement. This total includes more than 60% of an estimated 1,600 species of Microlepidoptera occurring in California. We have summarized the collection data, larval food, and other data in an Access program.

2) Faunal inventories. In an era when there is considerable interest in biodiversity and extinctions, it is a paradox that we do not have a complete list of the Lepidoptera species, including an estimate of the undescribed species, for any state, county, or locality in North America. I have initiated inventories at several localities in California; the most comprehensive of these are the faunas of Santa Cruz Island, Walnut Creek, and Big Creek, Monterey Co. During the past several years I have devoted the largest portion of my time to the several other California Channel Islands.

At Big Creek, we have processed 300 blacklight samples and more than 1,400 larval collections, and these represent about 350 species (37% of the known fauna of 950+ species). As a means of comparison to Neotropical faunal inventory, I am a collaborator on a NSF-sponsored project through OTS in which we are sampling the biodiversity of selected arthropods at the La Selva Biological Station, an adjacent 2000 meter elevational transect in Costa Rica.

The ultimate goals of these biodiversity studies are to: a) develop comprehensive local inventories of the species, which can serve as a baseline for comparison of other Nearctic and tropical faunal inventories; b) provide means for estimating species richness in North Temperate Zone lepidopterous faunas by projecting from species accumulation rates and from floral diversity, which often is documented well ahead of that of insects; c) analysis of larval host plant relationships of the Lepidoptera communities. 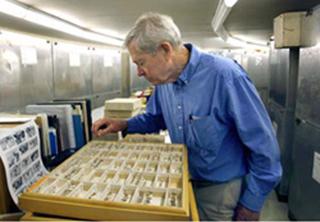